You are here: Home / Archive / Children at Play Blog / A laboratory for play 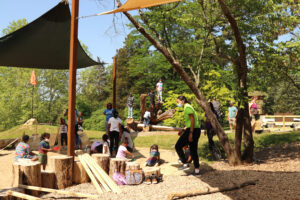 It’s been non-stop play at the new Playcosystem since it officially opened in May. Playcosystem, however, is not just a destination for families and children. Since November of last year, the Children at Play Network (CAPN) has hosted, consulted with, and toured with representatives from more than 30 organizations.

Many who came sought advice and inspiration as they considered building their own natural playgrounds, including the Parks Alliance of Louisville, Creasey Mahan Nature Preserve, and schools such as Kentucky Country Day School and Martin Luther King Elementary in Louisville. Other organizations were hoping to partner with the CAPN for special projects to increase diversity and accessibility – including the Louisville Youth Group, Urban Conservation Corps, the Jessamine County Public Library, and the University of Kentucky College of Design.

In addition to providing an amazing place to play for children, one of the chief goals of Playcosystem is to inspire and motivate others to explore and reenvision what a play space could look like. Those goals include focusing on connecting children with nature and operating as a laboratory, and inviting others to contribute ideas for its improvement.

The Children at Play Network welcomes all to join in the evolution of Playcosystem – come out and play!