You are here: Home / Actions Beyond Our Borders / Science Inquiry in the Forest 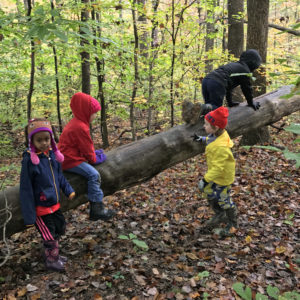 The forest is a laboratory full of questions to be answered, life to be observed, and materials to be manipulated with endless possibilities. Acorns become ingredients for soup; rocks can be stacked, rolled, used as tools or placed in a bucket; leaves are a changing resource with different properties depending on the season; water and dirt change with the weather. When children have a chance to explore the same patch of forest again and again with the same small group of children, it becomes the perfect environment for little scientists to experiment.

The children who are a part of the Muddy Boots Play Group have their own small patch of Bernheim Forest that they have claimed as their own. On a recent chilly morning, the children became interested in making mixtures. They worked together to transport sand, dirt, water, leaves and sticks to their wheelbarrow. They used tools to pour and stir. They negotiated who was adding what material and when more water was needed. They observed the properties of the materials change as they were mixed. Later a few decided to build a shelter out of poles and hay, and a child discovered through her own ideas how to use a long stick as a lever to move a hay bale down the hill.

The experiences at Muddy Boots are child-led. Adults are partners in the exploration, not the leaders, which gives children a sense of ownership over their own learning, a chance to ask questions and act upon ideas. Science inquiry at its core.

As information is shared, new ideas branch off for other children. They learn from each other, from talking and watching what each other do with the resources at hand. At the end of the morning, it was time to put out the campfire. Adults poured water on the fire, but the children decided it wasn’t enough as they could still see a few small red coals. One child remembered the sand the group had used in their mixture earlier and ran to get some to pour it on the coals. Another remembered some ice that was discovered in a puddle and placed a piece in the fire pit. That led to other children searching for more ice. They found ice on top of the water in the trough. They observed how cold the ice felt, and one child placed the ice to his nose and noticed that he could see through it. They found ice on a picnic bench, but it was too large to pick up. They tried several methods of breaking the ice before one child tested using her shoe and was able to break it into smaller pieces to carry.  The group of children became a team of scientists solving problems through a cycle of intentions, questions and actions building a foundation for science learning and allowing the children to think in a connected way, putting pieces and ideas together over time.

By giving children the space and time to go deep with their investigations, the experience is richer than any adult could plan alone. Children are active participants in their own learning, following their own interests, and the forest offers unlimited opportunities to explore, investigate, and wonder.

In addition to being the mother of a child participating in Muddy Boots, Robin has been on staff at Community Coordinated Child Care (4-C) since 2009. In that time she has been a credentialed trainer of early childhood science, a mentor in the Excellence Academy, and is now the Communications Coordinator. She has a BA in English and began her work with children as a naturalist at two Indiana parks, Marengo Cave and Wyandotte Caves. She worked for many years as the Early Childhood Education Coordinator for the Kentucky Science Center and has collaborated on programs for children with local organizations such as the Squallis Puppeteers and Bernheim Forest. Robin enjoys reading a good book, gardening, hiking, camping, making things and exploring the world with her son Liam and her husband Justin.