You are here: Home / In the News / Giants Among Us 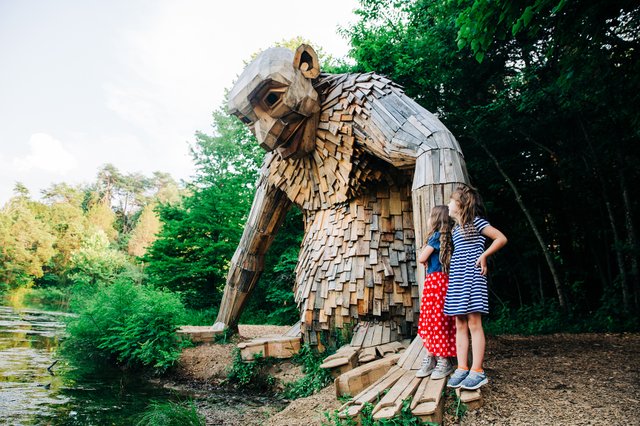 The assignment was easy enough: Write a story about the Forest Giants in a Giant Forest art installation at Bernheim Arboretum and Research Forest. Sure! I would drag my three teenagers along, and since my oldest will be going off to college this month, it was a perfect time to go out with Mom on a story assignment, like they did when they were younger and the world was amazing and full of wonder.

So, we were off to Bullitt County!

“Forest Giants in Bernheim,” I responded.

“How long will it take?” asked Annie, my 14-year-old daughter.

“Dunno. It’s a 2-mile loop to see all three,” I said, inwardly cringing, waiting for the onslaught of whining. But it didn’t come. So far, so good.

As we pulled off State Route 245 and into the main entrance of Bernheim, which is celebrating its 90th anniversary this year, we already were in a line of cars. Most of the visitors were paying the $10 donation the arboretum is asking visitors to give to help with the forest’s sustainability mission.

Normally, I would have been mildly surprised at the number of people waiting to get in, but after speaking with Jenny Zeller, Bernheim’s visual arts coordinator, I knew word had spread about the sculptures brought to life from the imagination of Danish artist Thomas Dambo.

That’s thousands of visitors who may never have visited Bernheim before, much less learned about its mission of sustainability. 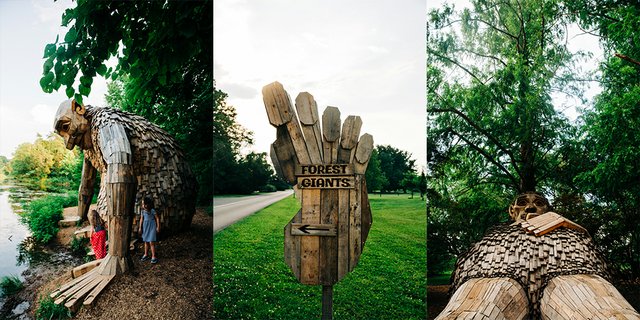 “The installation enables us to talk about the importance of giant forest blocks, like Bernheim, and what that kind of natural environment gives back to the region, whether it’s clean air and water or protecting thousands of species of wildlife and trees,” she said.

Bernheim’s message is apparent as soon as you step through the Visitors Center and onto the trail, which is marked with giant painted feet. The smell of the trees and the sounds of birds surrounded us “hikers” as we made our way to the first giant, Little Nis, the youngest of his kind.

“He looks like he’s about to jump in the water,” said my 18-year-old, Shawn, as we stood on the bridge over Olmsted Pond, waiting our turn to get an up-close look at the “little” fella.

“Well, if you read the information card, it says he’s looking at his reflection,” I said, in a warm, sarcastic, motherly tone.

Once at the arboretum, my three teenagers became my three toddlers again, walking around the giant, making funny poses, sitting on his hands and feet, and giggling while standing under his armpit. 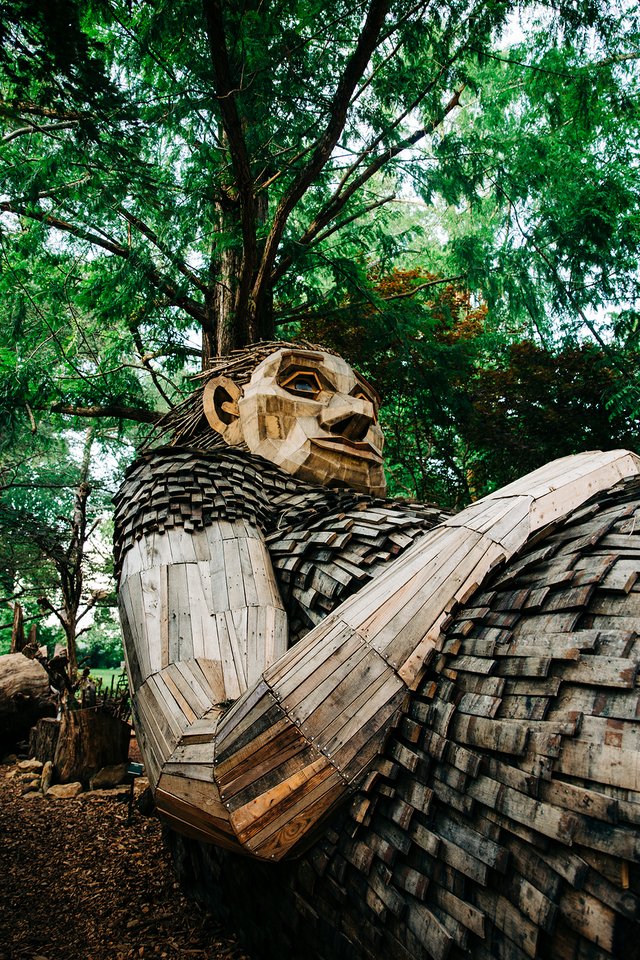 After a few dozen photos were snapped, we continued on a wooded path that soon opened up into Bernheim’s Big Prairie. Again, I waited for the complaining that, happily, didn’t come. In fact, I was amazed at the difference between my conversations with my children a few years ago—about SpongeBob SquarePants critiques, favorite food, superheroes—and those with my teenagers today—when can they get the keys to the car, who is friends with whom, and some kind, brotherly advice:

“Annie,” Shawn said to my soon-to-be high school freshman, “don’t be one of those freshmen who doesn’t think they are a freshman.”

“Just don’t act like an idiot, and you’ll be fine,” Nick said.

While I was musing on the reality that my babies are no longer babies, we entered the forest nook where a heavily pregnant Mama Loumari is resting, her food storage, chairs and even a dragon skull sitting behind her. 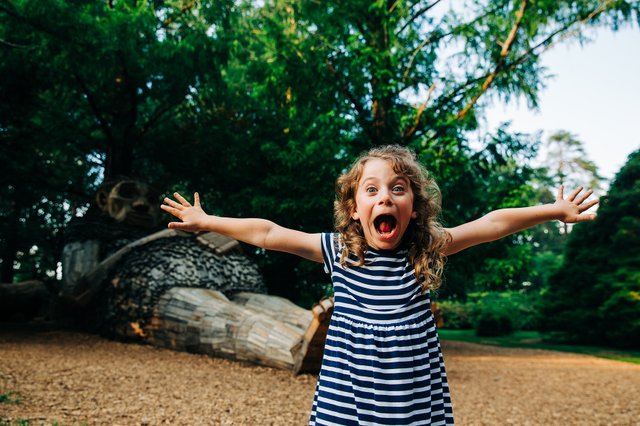 “Look at its hand! It’s huge!” one young visitor shouted to his grandma.

He was just one of dozens of visitors walking around the massive sculpture or stopping at a wooden pedestal to read “While the Weather Got Better,” the story of Mama Loumari and her family. The tale is of Isak Heartstone, a giant currently installed in Colorado, and his visit to his wife, Mama Loumari, and their two children, Little Nis and Little Elina. The chapter is part of Dambo’s larger narrative, The Great Story of The Little People & The Giant Trolls. So far, Dambo has created 50 giants across the world, on display in Europe, North America, South America, Australia and Asia. Mama Loumari and her children are the 41st, 42nd and 43rd sculptures in the series built from materials that can be found only in the Kentucky region.

“Does anyone smell the whiskey?” asked an older gentleman. “Smells good!”

Yes, Mama Loumari smells like whiskey. She is made from the staves of discarded bourbon barrels. In fact, one of Mama’s chairs is fashioned from discarded bats from the Louisville Slugger factory.

Zeller said Dambo’s use of such materials is part his message of sustainability.

“The work speaks to our region,” Zeller said. “Thomas hopes to inspire us to recycle things that would otherwise be thrown in the trash, and make beautiful things out of these objects. He’s asking us as a viewer to evaluate our lifestyle choices and the effects they have on our environment.” 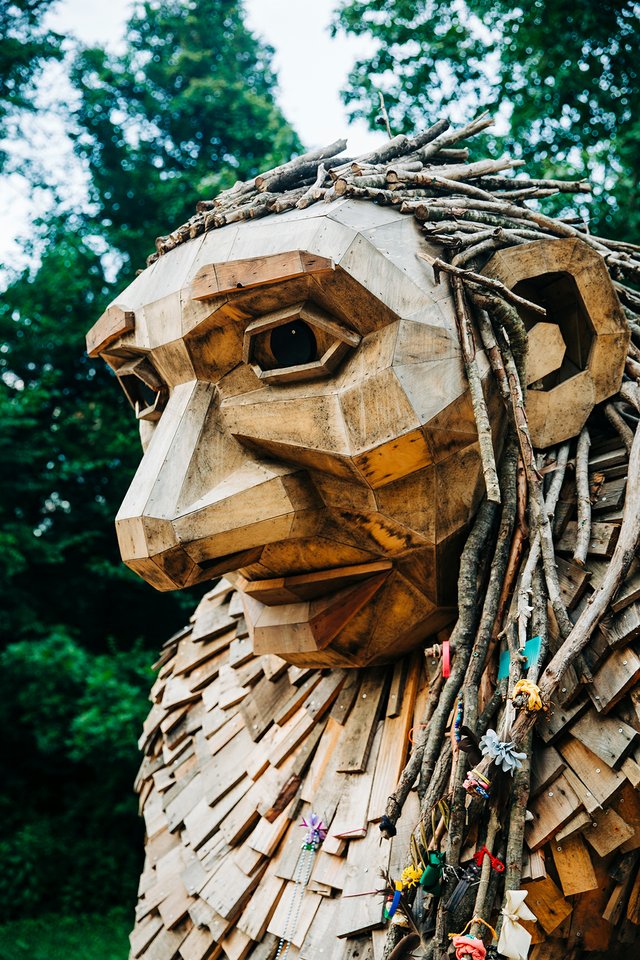 As for the giants’ environment, the natural elements will determine just how long visitors to Bernheim will be able to enjoy the sculptures.

“We have been telling the public that we foresee them lasting at least three years,” Zeller said. “We really don’t know what Mother Nature has in store. We will be keeping them until they are no longer safe or aesthetically pleasing.”

After seeing Little Nis and Mama Loumari, all four of us were caught up in the spirit of the fairy tale and eager to see the eldest child, Little Elina. The path meandered through the woods, over two fingers of Lake Nevin, and opened up into a field where Little Elina is “building” the outline of a feather with rocks. From her hair hang beads, bracelets, keychains and ponytail ribbons—baubles left by visitors to replace the stone bracelet stolen just after the Forest Giants installation was opened to the public in March. The gifts were simple acts of kindness that seemed to inspire those visiting the young giant. 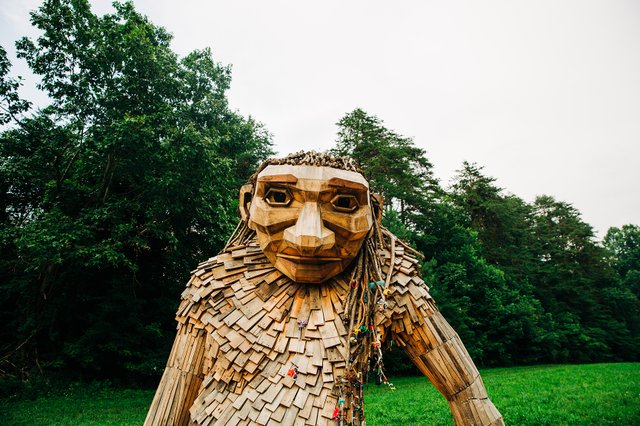 “Let me get the giant’s face,” visitor Frank Stith said as he was taking a photo of a young couple at their request.

He then turned and offered the same courtesy to me and my children, guiding us to the best place to stand for a perfect family shot.

Stith and his wife, Kathy, of Meade County brought their granddaughters to Bernheim while the girls were visiting from Washington, D.C.

“We had read about them,” Stith said. “They’re so cool and so peaceful.”

Those who have come to view the giants are from all parts of the country. This year, Zeller said, Bernheim has had visitors from 45 states and four countries.

“What I love about this is that art has had a place at Bernheim and in nature for many, many years,” she said. “While most people in the past would come to Bernheim for other reasons and then discover the art, they are now coming specifically for the art and learning about all these other wonderful things that Bernheim has been doing for our region and the national environment at large.” 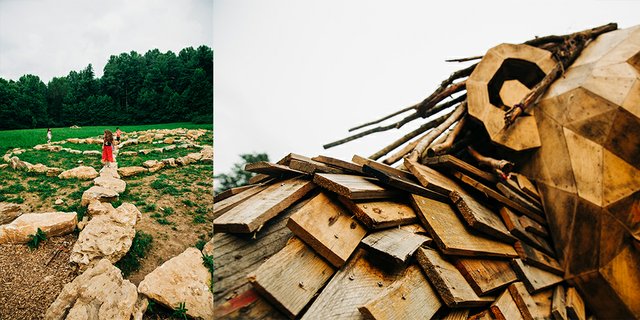 My teenagers actually learned something as well.

As we doubled back through the giants’ trail, I did what most moms might do—asked them about what they had seen and what they liked and learned from the day.

“How discarded materials can be made into something that’s entertaining for everyone to enjoy,” Annie said.