You are here: Home / In the News / Bernheim volunteer completes 100th month of Millennium Trail

Tony Cecil was met with cheers and applause Monday afternoon as he finished the last few yards of the Millennium Trail at Bernheim. The more than 13-mile hike, which he had started early that morning, marked the 100th consecutive month Cecil completed the trail. The accomplishment was recognized by those who gathered at the trailhead Monday, and it was also celebrated by family and friends who surprised Cecil with a party Wednesday afternoon.

“Not only is it inspiring that you get up and get yourself on that trail regardless of the weather, but that you slow down and take notice of the things around you,” said Wren Smith, interpretive programs manager, as she congratulated Cecil. “We are all so very inspired and lucky to know you.”

Hiking the entire Millennium Trail — Bernheim’s longest — was something Cecil had first done several years ago. When he turned 60, he decided he wanted to complete the trek every single month. That was back in 2010. 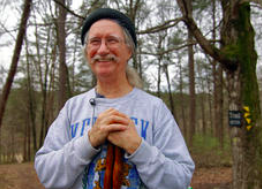 “I’m not really sure what drew me to it,” Cecil said, but through good weather and bad, he has stuck to his goal.

The trail is 13.75 miles long, takes about seven hours to complete and is recommended only for experienced hikers. It features steep slopes, creek and road crossings, and rough terrain.

Completing the trail 100 times is the equivalent of walking halfway across the United States, which Cecil has actually surpassed as he’s walked that trail and others at different times with friends and Bernheim visitors.

Cecil said he knows the Millennium Trail so well now, he could figure out where he was if he was dropped in at nearly any place along the way. The hike is a way for him to connect with nature, and on Monday, he did just that.

“Later on in the afternoon I spooked one deer — a whitetail,” he said. “I heard pileated woodpeckers out there,” and he identified several varieties of wildflowers.

When asked, “Why Bernheim?” Cecil said he lives in the Samuels area, and the forest and its trails are “convenient.” But his love of Bernheim extends beyond monthly hikes.

Cecil has been volunteering with the Arboretum and Research Forest since 2001, shortly after a volunteer naturalist program was started. Over the years, he has assisted with the forest’s education department, has worked in the greenhouse and has guided visitors along numerous trails.

“I’ve enjoyed every bit of it,” he said of volunteering. “It’s the exposure to nature. That’s the main thing.”

He joked that when he first started volunteering and visiting Bernheim for hikes, he told his wife he was having an affair, and the other woman was Mother Nature.

“I really have fallen for nature,” he said. “Bernheim has done that to me.”

Fellow volunteer naturalists and Bernheim staff — whom he considers family — were there to greet Cecil as he completed the trail Monday. They, too, were proud of his accomplishment.

“That shows dedication when you make your commitment to yourself to be more active, to pay attention to things around you,” Smith said. “We think that’s worth celebrating.”

While Cecil has been dedicated for the past eight years, he doesn’t plan to stop his hiking now that he has reached 100 months, and has a few new goals in mind before he turns 70.