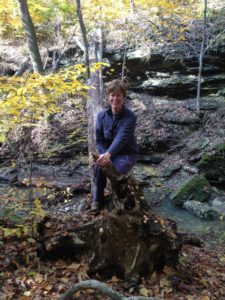 Meet Sandy Nafziger, one of Bernheim’s newest Naturalists in Training (NIT).  After signing up to work at BugFest in September, 2012, she was immediately inspired by Bernheim’s community of volunteer naturalists.  Since attending the NIT orientation in January, 2013, Sandy has been involved in countless events and programs. She is always willing to help at a discovery station shadowing another naturalist or come to Bernheim on a rainy spring day to help remove invasive species in the natural areas.  Her enthusiasm for learning and sharing her love of nature was reflected at June’s annual volunteer appreciation picnic, where she was awarded a special “rookie of the year” award.

Sandy’s relationship with Bernheim began before she even had a chance to experience it for herself.  Growing up in northern Illinois, she had an uncle who lived in Cox’s Creek and was one of Bernheim’s earliest volunteers.  Though she never had a chance to visit him and fulfill his promise to accompany him to Bernheim, she remembered the stories he would tell.  In 1997, when she moved to Louisville with her family, she made it one of her first priorities to bring her children to Bernheim.  Her love for the forest has continued since.  Now that her children are older, she wanted to follow in her uncle’s footsteps and become more involved.

As a newer volunteer, Sandy still loves experiencing all aspects of volunteering.  She relishes the opportunity to work with other naturalists and learn from them on a variety of subjects, whether it’s at a discovery station on ECO Kids Discovery Days or by opening Bernheim’s historic fire tower, sharing Bernheim’s history with visitors.  She loves discovering the many ways nature is tied together – how everything in nature is dependent on its relationship with everything else.

She is also learning how nature can touch people’s lives in many ways – from the expression on a child’s face when he or she learns something new and exciting, to inspiring a cancer-stricken visitor to climb up all the steps at the fire tower.  Experiences like Sandy’s are a fundamental part of Bernheim’s mission to connect people with nature. Her deep connection with nature through the naturalist program helps to inspire the visitors she touches to find their own connections with nature.  We are so lucky to have so many great volunteers like Sandy.