You are here: Home / Bernheim History / The Jacksons of Bernheim

The land that became Bernheim Forest was occupied by many families during the years prior to Isaac Bernheim purchasing the property in 1928. Some of those families are now remembered by areas and trails named for them including the Magruders, the Overalls, the Joneses, the Houcks, and the Jacksons.

The Jackson family was a very large one. John Thomas Jackson Sr. was born in 1812 and married Catherine Spencer in 1830. The 1900 census records for Catherine indicate that she had twelve children with six living as of that survey. John Sr. was employed as a cooper (a barrel maker). He was 5’9” with gray eyes and dark hair.

John Jackson Sr.’s son, John Jackson Jr. entered the Union Army during the Civil War. He enlisted on October 14, 1861 at Camp Pope near New Haven, Kentucky. His enlistment was interrupted when he deserted on October 7, 1862 to return home. While home, he married Eliza Newton who was then 14. John Jr. returned to the Army on September 28, 1863 and served until January 14, 1865, when he was mustered out. John Jr. and Eliza had five children. After Eliza passed away, John Jr. married Rose Ann Jones (born in 1862) in 1881. Together they had seven more children. Rose Ann died in 1940. John Jr.’s occupation was listed as being a huxter (usually now spelled as huckster and defined as a peddler) in the 1880 census, then listed as a farmer later in his life.

Three of John Jr.’s brothers, Benjamin, Dory, and Hillary also served in the Union Army and all would serve out their enlistments. Such was not the case with their father. John Jackson Sr. joined the Confederacy on September 15, 1862, about eleven months after John Jr. entered the U.S. Army. He was captured nine months later and was sent to the prison camp at Fort Delaware. On October 14, at the age of 50, he died there. His body was interred at Finn’s Point Cemetery (now Finn’s Point National Cemetery) in New Jersey. Although he was a resident of Bullitt County, it is unknown if he ever lived on what is now Bernheim Forest.

John Jackson Jr. owned the 400-acre Jackson property now a part of Bernheim Forest. In the Bullitt County Deed Book, Rose Jackson stated that they moved onto the property in 1880 and obtained the right to it through adverse possession. The concept of adverse possession has its roots in English common law and is the acquisition of land through occupying it for a period of time without the permission of the previous owner. In Kentucky, the minimum length of time for ownership to be established is usually fifteen years. When the Jackson heirs sold the land to Dr. Robert Wedekind in 1911 and it became part of his Ledge Rock Farm, no title was obtained. Interestingly, of the ten marked burials in the Jackson Cemetery, six are for individuals who died between 1911 and 1926. This could cause Dr. Wedekind’s legal ownership claim to be in further doubt. 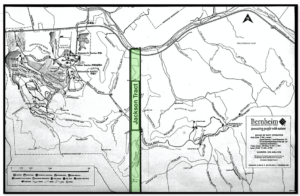 In 1928, when Isaac W. Bernheim purchased the land, there still was no clear title. This was a significant problem as it left the Bernheim Foundation at risk of a legal challenge. This long, very narrow strip of land, less than 400 yards wide, ran north and south through what is now Bernheim Forest severing it into two pieces. Without this property, Bernheim would have no direct route between the eastern and western parts of the property. The Canopy Tree Walk, Iron Ore Loop, Elm Lick Trail, Fire Tower Loop, and Overalls Loop would not have been accessible from the arboretum, and thus, the Millennium Trail and Jackson-Yoe Loop would not have been possible. The purchase of the property on May 1, 1928 proceeded without a resolution to this issue. The legal issues surrounding the Jackson tract and two other smaller pieces of property were resolved in January, 1929 making Bernheim property whole. The living heirs to the Jackson land all signed the necessary legal papers relinquishing any claim to the property.

By coincidence, John Jackson Sr. and John Jackson Jr. were not the only men bearing that name to have an important role in the Bernheim story.

A different John Jackson started working for Isaac Bernheim when he was a young man. He was trained to be a coachman and was the driver of Mr. Bernheim’s horse drawn carriage. After the automobile became the desired mode of travel, he continued to work for Mr. Bernheim until Mr. Bernheim died on April 1, 1945, at the age of 96, in Santa Monica, California.

As his chauffeur, Mr. Jackson drove a series of automobiles for Mr. Bernheim. For a time, he drove a Rolls Royce. When Mr. Bernheim moved to Denver in the mid-1920s Mr. Jackson complained that the Rolls Royce had difficulty in handling the mountain roads in that area. They agreed to replace it with a Buick on the condition that they split the cost. A seemingly unusual arrangement between a wealthy and generous man and his driver, but one that Mr. Jackson agreed to. The Rolls Royce was stored in a shed at Bernheim for many years until it was finally sold. The Buick became Mr. Jackson’s property upon Mr. Bernheim’s death.

There can be little doubt of the affection and respect the two men had for each other. As he entered the final years of his long life, Mr. Bernheim left instructions that Mr. Jackson’s travel costs and expenses from Santa Monica to Louisville to attend the services at Cave Hill Cemetery. John Jackson had received investment advice from Mr. Bernheim and was able to live comfortably in his retirement from those investments and the monthly check he received from the Bernheim Foundation for the remainder of his life. When he died, the Foundation was the sole beneficiary of his sizable estate.

The three John Jacksons of Bernheim all had important roles to play in the history of the forest. Visit often and take advantage of their legacies.