You are here: Home / Arboretum / The Feast on the Forest Floor 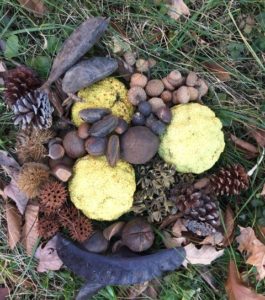 Colder weather has returned to the forest.  Most of the trees have lost their leaves.  The wildflowers are gone and the the prairie has turned brown.  As great as the beauty of this season is, there are challenges for its animal residents.

With many of their food sources temporarily unavailable, the mammals and birds must make the transition to their winter menu.

The major part of that menu is mast.  Mast, specifically hard mast, is made up of the nuts of the oaks, hickories, and beech trees throughout the forest.  (A few other tree species make smaller contributions to the food supply.) Soft mast, which consists of edible flowers, buds, and soft fruit such as berries are available during the warmer months.  Like most of us, the animals have their favorite foods.  During the colder months, the nuts of the Juglandaceae family (the hickories, walnuts, and pecans) are readily eaten by deer, squirrels, turkey, and other animals.  Not all members of this family enjoy equal popularity.  Some, such as the bitternut and pignut hickories, are high in tannins and have a very bitter taste.  They are often neglected until their tastier relatives have become too scarce.  A similar situation can be found within the Fagaceae family which includes the oaks and beeches.  In our area, the fruit of the American beech and the members of the white oak group (northern white oak, chestnut oak, bur oak, etc) are favored.  The red oak group (northern red oak, scarlet oak, black oak, etc) also have a high tannin content that makes them less desirable.  The American chestnut, with its large flavorful nuts, was for many thousands of years one of the most desirable food sources. It is, tragically, almost totally lost in our forests.

The cone bearing trees in our area are also on the menu.  Trees such as the white pine and Virginia pine have cones which are visited by birds, squirrels, and other small animals to consume the seeds they contain while leaving behind the indigestible cone.  By contrast, the Eastern red cedar bears small soft sky blue cones that resemble berries.  These cones are consumed by several bird species and have given the Cedar Waxwing (a winter visitor to this area) its name.

Occupying the far end of the taste and nutrition spectrum are a few other trees.  The Ohio buckeye, the black locust pods, and the fruit of the Osage orange are all avoided by most of the animals of the forest.  The Osage orange seeds contained within the large fruit (its unusual appearance often compared to monkey brains) are eaten by squirrels but are avoided by the larger animals of the forest.  This limits the species’ ability to spread to new areas.  It is theorized that this tree has lost its primary propagators.  The extinct giant sloth has been proposed as a possible consumer and propagator of the Osage orange.

With all of these food choices, there is great year to year variability in their availability.  The quantity of nuts and other mast is dependent on the weather, particularly during the spring when  pollination takes place.  There are also natural but little understood cycles of production with both good and bad years for most species.  Each year the Kentucky Department of Fish and Wildlife Resources performs a mast survey.  For the 2017-2018 winter, the survey is showing a good red oak production but a poor one for white oaks.  This means that deer and other animals will be traveling longer distances in search of their meals.  These variations in the quantity of mast serve to limit the animal population to sustainable numbers.

When you next visit the forest to admire its winter splendor, look for the mast on the forest floor and consider its vital importance to the health of its occupants.