You are here: Home / Blog / The Bugs of Bernheim: Pipevine Swallowtail Butterfly

After returning from a Bernheim discovery field trip at the Kentucky Science Center one day, a Volunteer Naturalist directed me to a near Aristolochia tomentosa (scientific name), also known as Dutchman’s Pipevine, behind the Education Center. There were dozens of pipevine caterpillars crawling around the pipevine and munching on the big bright green leaves. As I approached the dutchman’s pipe, I heard a sound that resembled the crackle of Rice Krispies. In awe and amazement, I leaned my ear closer to the collection of caterpillars and realized the sound was coming from them feasting on the leaves of the pipevine. 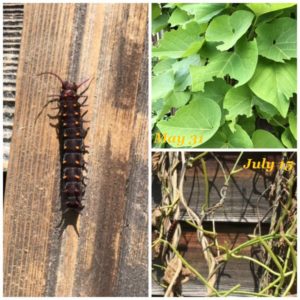 A few days later, when I returned to the dutchman’s pipevine, the leaves were all chewed up and the black caterpillars with orange-red spikes down their body were gone. The caterpillars tend to travel away from the host plant to another plant for the chrysalis period. I looked for the chrysalids but couldn’t locate any. Once the pipevine swallowtail matures, it feeds on and helps to pollinate many wonderful flowers such as milkweeds, phlox, petunias, lantana, and verbenas.

Later, I was informed that the pipevine larvae is only laid on plants that come from the pipevine family, including dutchman’s pipevine and virginia snakeroot. These plants contain chemicals that are poisonous to some species. The pipevine caterpillars eat the leaves and are able to become poisonous themselves. Hence, predators, such as birds, have learned to not consume butterflies with black and teal coloring. This natural trend has lead to other butterfly species to adapt mimicry, when one species copies another to ensure their survival. Some of these species include the eastern black swallowtail, spicebush swallowtail, and the red-spotted purple butterfly, which are all not poisonous, but possible predators are unsure and leave them alone.