You are here: Home / Blog / The Bugs of Bernheim: Cicada Killers 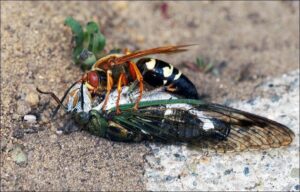 On hot summer days, the air is filled with the sound of cicadas.  The male’s mating call is a loud series of beats and clicks strung together to make one long, continuous undulating song.  While preoccupied with finding love, the cicada has inadvertently captured the attention of another female insect who eagerly wants to meet him.

The Cicada killer wasp belongs to the genus Sphecius and feeds on nectar,  but is a fierce hunter of cicadas. These wasps are commonly found in burrows, located underneath bare ground, that  contain large cavities for storing food and raising young.  The female cicada killer stings and paralyzes her prey which is many times her size.  She is hardly able to fly with her oversized catch, so she climbs trees and glides down to ground level many times just to get back home with the meal.  This harvest is not meant for her, but her offspring.  She lays an egg near the sting wound on the cicada which will serve as an entrance for the newly hatched larvae to feed until it pupates.  She may choose to lay an egg that makes a female or male wasp dependent, which is needed according to population levels at the time.  Cicada killers are approximately  1 inch long with a black abdomen containing yellow patches, resembling a hornet.  They can be found all over Kentucky, but are not known to be aggressive toward humans unless stepped on or trapped unwillingly.