You are here: Home / Arboretum / The Blue Ash Shines in Winter 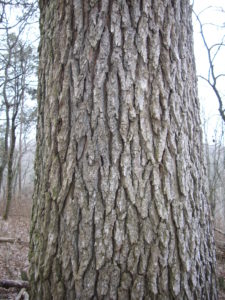 Many people think that has it gets colder, there’s not as much to see in nature. Most of the insects are gone and most of plants are dormant. That is just not the case. Winter is a great time to come out to Bernheim, and see the beautiful rock outcropping and appreciate the landscape. It is also a great time to see and appreciate the trees here at Bernheim. Bernheim Forest has over 60 species of trees in the natural areas, and a lot more in the arboretum collection. A beautiful species, Blue Ash (Fraxinus quadrangulata), is found in many locations in the natural areas and is usually overlooked when hiking through the woods.

It got its name from the blue dye that pioneers would extract from its inner bark. It has opposite, compound leaves, and differs from other ashes by its 4 winged branches. It also differs from other ashes in that it doesn’t have female and male trees, which means every tree can produce seeds. Bernheim Forest is a perfect place to find Blue Ash, since it thrives in dry soils of alkaline pH, and is found at limestone outcrops, which are abundant here. Blue Ash are normally found in limestone and are most abundant in the Bluegrass and Nashville Basin with the oldest and largest blue ash found in Kentucky. Henry Clay named his Lexington home Ashland in honor of this species.

Unfortunately, the time to enjoy this beautiful species may be running out. All ash trees here at Bernheim are threatened by the Emerald Ash Borer (Agrilus planipennis), a beetle that kills many ash species such as white and green ash, but the effect on blue ash is still not fully known. Emerald Ash Borer was first discovered in Michigan near Detroit in 2002, and has spread across the eastern United States, including Kentucky. The borer was first found in Kentucky in 2009. In the past few years the effects of Emerald Ash Borer here at Bernheim has been seen and felt with the loss and decline of many of our green and white ash trees, especially in the arboretum. Many of the beautiful ash trees seen in the collections have been removed, or will be, to protect the safety of our visitors from falling dead ash trees. Even though Bernheim Forest will probably lose most of our green and white ash, the story on Blue Ash here at Bernheim Forest has yet to be written. Blue Ash seems to be more resistant than White Ash, and might survival the borer attack. Few blue ash here at Bernheim have shown attacks by the borer, but it might simply mean that the borer will kill the other ash species first and then move on to the Blue Ash, or the Blue Ash might have some resistance. Truly only time will tell. We can only hope that the Blue Ash has some natural resistance to the emerald ash borer, and future generations can enjoy this beautiful tree species. So please come out to Bernheim Forest this winter and enjoy not only the beautiful Blue Ash, but also all the other tree and shrub species found in the natural areas and arboretum.