You are here: Home / Arboretum / Reflecting on the 2020 Growing Season in the Edible Garden 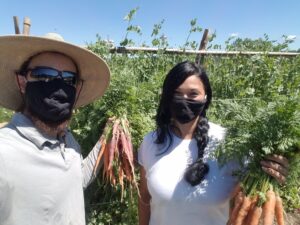 As the end 2020 nears, the bountiful plants of summer in Bernheim’s Edible Garden become of the food for nearby animals – an Edible Garden cycle that is a wonderful representation of the greater ecosystem. On these cold days, I find it important to reflect upon and review the year’s successes and difficulties in the garden to be still and patient during this quiet period in the non-growing season and to plan for new projects and growth in the following year, not just in the garden. While 2020 has brought about unexpected challenges for many around the world, plenty of plant and animal communities are thriving, not least of which is Bernheim’s Edible Garden.

This year, the Edible Garden finished its 7th year of full production and the results are in! 2,677 lbs of vegetables were harvested, making this the largest production year since its inception. A number of contributing factors worked together to bring about such a productive year, some of which I implemented and others graciously provided by nature. Every gardener knows that while there are endless contributing factors to the health of a garden, there is only so much humans can control. To account for what cannot be controlled, my two most precious tools are observation and patience. 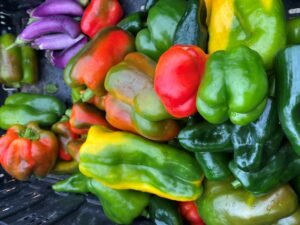 While much of the US experienced a heavy drought again this year, we were grateful for the abundance at Bernheim. July, August, and September tend to have the highest potential for drought in our area, but only September was a noticeably dry month this year. The consistent rain was by far, one of the biggest contributing factors to this year’s production. At the end of 2019, I decided to mulch some of the 32 raised beds with extra straw to increase the worm and fungi communities, and it worked! I had never seen so many worm and mycelium woven through the beautiful soil! During the growing season, I made sure to keep a thick layer of mulch that covered every inch of soil I had planted. Mulch not only helps retain moisture, it also acts as a protective barrier to the entire soil food web, helping prevent run off of important minerals and nutrients, and adding more organic matter to the soil. 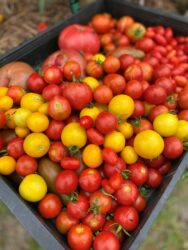 I used mosquito netting early to cover beds with newly planted tomatoes and peppers to prevent the devastation caused by chipmunks in the previous year. I only left the netting on for a month and made sure to remove it once it was time for pollinators to move in. The netting also helped protect the kale, radishes, and beets from the aggressive onslaught of flea beetles, assisting in the overall growth and production.

Lastly, I chose to plant the peppers closer together this year (1.5 to 2 feet apart) to provide more balanced nutrients and stronger support for the plants. I noticed higher yield, less sun scalding, and overall massive plant growth, with some plants growing 3 to 4 feet tall! 2019 held our previous record for peppers harvested at 192 lbs., but this year we grew 271 lbs with many consistent weeks of 20-lb harvests. 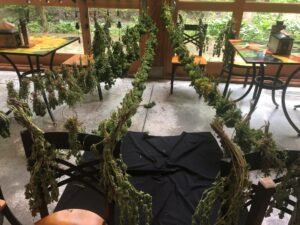 So where did all the produce go? People asked this question a lot about this year because Isaac’s Café was closed all growing season. While the vegetables were unable to be served fresh to the public, the staff at the Café worked throughout the year to store the vegetables in a variety of ways like canning tomatoes, drying herbs, and freezing stocks and sauces.  We can’t wait to put all of the delicious fruits of our labor to good use as soon as we are able to open the Café once again.

With 2021 on the horizon, let nature inspire you – use this time of cold and hibernation to rest, reflect and refresh for the coming year. While there are so many things we cannot control, exercise patience with yourself and others. Give yourself the grace to experiment – see what changes work for you and let go of what doesn’t.