In Celebration of Black History Month, Bernheim’s Field Ambassador, Kenyetta Johnson interviewed folks prominent within their communities and asked them to share their connections with land and heritage. In today’s interview, we share and welcome the stories of a proud wife, mother, community advocate, and farmer known as LeTicia Marshall. LeTicia Marshall is the trailblazer for a Black-owned urban farming company called BearFruit & Grow in the Shively neighborhood in Louisville, KY. The transcription below gives a window into the life of LeTicia, who was exposed to farming at an early age, reconnected with the soil as an adult, and rejoined the legacy of her family’s connection with land. 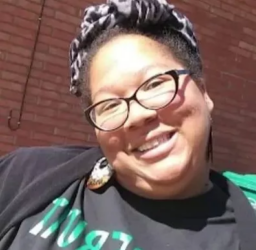 Where are you and your family from originally? When did you get connected with land and gardening? Did you grow up with it? 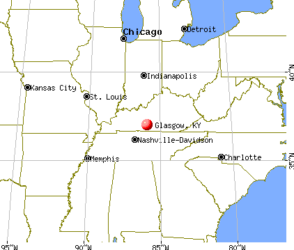 I am from Glasgow, KY. In my family – this is what you did: my family owned a farm in Metcalfe Co, KY. My grandparents’ farm schedule began at 5 a.m., but they would let us [children] sleep in. They would come pick us up so we could work at the family store or to do farm chores. We all had to work. We were in the tobacco field, hauling it in and treating it for pest issues. I can’t forget that heat. My grandparents had cows – we fed the cows and the hogs. They also had a vegetable garden, but the cash crop was tobacco. Also, WE USED TO hunt! My grandfather hunted rabbit and deer. He would take us hunting for “dryland fish” also known as morels which is a type of mushroom. He would tell us if we made too much noise the mushrooms would go back in the ground- they just wanted us to be quiet in the woods!

I realized we were being taught so much stuff about our culture and how to take care of ourselves. Today, if I need to go forage, I know what to look for. Now, I totally see it as sustainable practices used to take care of us — back then we thought it was just fun.

Is the grocery store that your grandparents owned still active?
No. The first store ever was owned by my great grandpa who passed away in 2005. My great grandfather, RT Forrest owned “Forrest Grocery” off Knob Lick Road, in Metcalfe County. My grandfather, Robert Forrest and grandmother, Virginia (he married) owned their grocery business called “Chicken Bristle” on Savoryard Road in Metcalfe County. They still own the property but rent it out to someone else.

They were the only Black-owned grocery store in the area. I remember my grandmother cooked breakfast, lunch, and dinner at the store. It was cool to see all the white people waiting in line for my grandmother’s food. I didn’t think about Black and white so much then, I just knew my grandmother’s food was good. Who wouldn’t want to eat her food?! Though as I got older, I had my own experiences with racism – it was one of those things you just dealt with in my town.

Is there backlash for wanting to be a Black female farmer?
Oh yes! Some people- including Black Farmers would ask, “Do you know our history in this country? Why would you want to do that [become a Black farmer]?” My initial thought was, I’m so sad for them that they don’t understand our greatness and the legacy we’ve built as a people in this country. Yes, being enslaved was horrible, but that isn’t all of who we are in this country.

I embrace the story that my family built a legacy of homeowners and landowners! This story exists as early as five years after emancipation [1863-1865]. That makes me incredibly proud. I had sharecroppers in my family as well, but they were able to come out of that and build something for the family. It’s a legacy! Our families worked their butts off for all they had, including the shacks and the land underneath them. I want to continue to cultivate the land, understand it, and build a relationship with it.

Five years ago, urban gardening was something that Black folks didn’t do – it was what wealthy people with leisure time did. Now I can say there’s lots of youth who believe it’s something they can do!
Backyard gardens, urban farming — that stuff was done years and years ago. There were urban farmers a long, long time ago during the Great Migration when Black people moved from the South to the North. I want to encourage people to garden or farm urban spaces. I love the fact that more people are connecting to the soil, connecting to the land, and encouraging young people to do the same. You’re supposed to do this! That feeling that’s drawing you back to the soil is your ancestors calling you back to it and we have to reclaim it.

There’s the term permaculture – coined by a white man. Ultimately, it’s an African concept that was adapted by a white man. Intercropping aka growing more than one type of crop together has been done since the beginning of time. Farmers, relatively speaking, have only begun monocropping the land in more recent times. Monocropping is a technique conventional farmers use because cash crops brought in the money.

One thing I’ve learned is that the generations that came before have a lot of power and impact in why we’re so disconnected from the land – they didn’t get that knowledge from their elders or didn’t care to get that knowledge. They didn’t share that with us and kept us from it because they thought we would be more successful if we did other things.  They adopted the narrative of the greater society and taught it to us, surely to protect us- but it had the effects we see today. 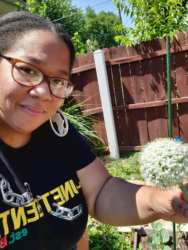 I’m part of that generation. My grandparents didn’t train us to take over the farm. My grandmother is one of ten kids and who do you think raised the other nine? – She did. She’s had a hard life, and she doesn’t want to talk about that. The chores were just what we did, nobody said “one day I would like you to take over the farm.” The farming lifestyle is just what my grandmother did, how she lived. My grandmother is still caring for it, along with her 22 cows, her eight goats, and the paylake where people fish. There hasn’t been a conversation on how the farm will go on.

I’ve got two baby girls, one who is six years old and already a farmer herself. I had her in the garden when she was 2. She plans to teach some classes this year for kids. When she was even younger, she wanted to play in the dirt. I’d say, “No, we’re sowing seeds today so we can eat later!” Now that she’s six, she understands I have to plant this at a certain time every year or I won’t have enough food. My 6-year-old understands I have to take care of it [seed], water it, and then nature will do its part. She’s learning to respect that as well. Unlike during my childhood, that’s the difference between me doing something because it’s a chore versus being shown the why and how. I feel like more and more people are understanding that.

We have to break these curses of “we’re not gonna talk about it” or our families are going to keep perpetuating the loss of knowledge from elders.

I do want to ask: is there anything you feel you want people to know about Black history and heritage as it relates to empowerment, creativity, identity?
All those things! That’s what I have been personally thirsty for lately. I want to learn more about who I am and where I come from. If you are not sure why, when you scoop up the soil, why you are drawn to something, and why the energy is so empowering — it’s because the bones from your ancestors are part of the soil. So, we are literally holding in our hands, the history, sweat, blood, joy, happiness, and celebration from our people all in the soil. I want more people to be able to feel the healing from the soil.

For me the soil is a place of healing and confrontation, I had to deal with some demons. But when people come here [BearFruit], that’s what I want them to feel. They may not know what to call it. However, there will be some result because you touched the soil. I want everybody to be able to experience that – you’ll figure out who you are. It might not be pretty all the time, but it’s up to you to figure out what you’re going to do with it. Thank you.