You are here: Home / Blog / Life and Death on the Bent Twig Trail 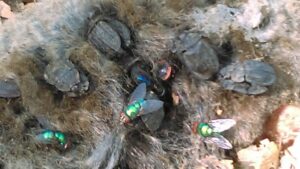 Typically when we think of Spring, we think of new life . . . after all, the woods, fields, creeks and our own backyards are bustling and buzzing with the sights and sounds of this annual stirring. This is certainly true on the Bent Twig trail where I heard the shy ovenbirds loudly chant their love songs from low thickets, in hopes of starting a family.  A few moments of tuning in and one readily hears the various notes from this tide surging towards life and more life.  The emerald light shining through the tender young  leaves seems a visual echo of this refrain,” Life is here, life is now”.  But you don’t have to look hard to find life’s forever wedded partner, death.

Thus, I encountered a dead mole in the middle of the Bent Twig Trail. It too was buzzing with life, but in the form of green bottle flies, Lucilis sp. . . . and the more silent carrion beetles, subfamily, Silphidae. The blood-orange eyes of the green bottle flies seemed vacant, but perhaps it is the fact that they were engrossed in passing on their genes, in what will soon become a riving mass of maggots. The carrion beetles must find this dead mole the preferred place for romance . . . there are more than a dozen of these thumb-nail size creatures and most are paired up and actively copulating. Another undertaker species that you can occasionally stumble upon is the burying beetle, Nicrophorus sp. These beetles actually bury the bodies of small dead creatures by digging a “grave” right under the deceased then burying themselves in the decaying animal where both parents provide carry for their young. The American Burying Beetle, Nicrophorus americanus is an endangered species. 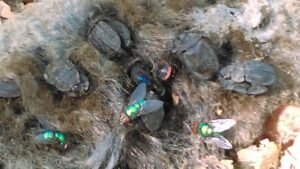 Years ago I followed a stench which led me to a deer carcass. Holding my nose, I watched hundreds of carrion  beetles moving about like flattened bumper cars . . . I could a actually hear the click and clack as their chitinous “carapaces” crashes into each other in their feverish pursuit to reproduce. So the drama on this little mole’s transition back into the earth seemed a rather calm affair. Yet I know that appearances can be deceiving, and that among these quieter rituals of mating and egg laying, there is a turf war going on at a fever’s pitch. At stake the spoils of death that will feed the young of these competing species.

Decomposition, and the micro and macro organisms, as well larger scavengers are as necessary to life, as life is a necessity for decomposition. The circle keeps spinning.