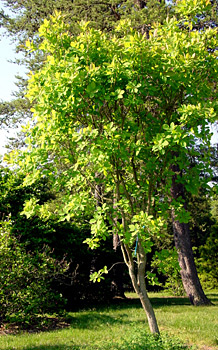 Cotinus is from Greek and refers to the wild olive; obovatus is Latin and means “egg-     shaped,” in reference to the shape of the leaves of the tree. This tree was named by Constantine Samuel Rafinesque (1783-1840), a pioneering naturalist from Constantinople who also lived in Kentucky.

The name refers to the smoky appearance of the tree when it is flowering. Other names include chittamwood.

American smoketree occurs in isolated stands in Alabama, Arkansas, and the Edwards Plateau of Texas, with a few scattered trees ranging north to Kentucky and Missouri. Trees are somewhat rare. Trees grow on dry ridges, bluffs and rocky limestone woodlands. This species is questionably native to Kentucky; the single Kentucky record may be from a cultivated specimen. 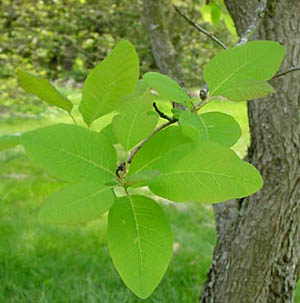 American smoketree is not ranked as a plant of conservation concern by the Kentucky State Nature Preserves Commission. It is listed as a tree of Special Concern in Tennessee. In southern Tennessee this species occurs in rocky limestone woodlands.

American smoketree is a deciduous small tree or large shrub. Trees typically grow 20 to 30 ft. tall with an equal spread. Trees are upright, occasionally multi-trunked and have a rounded shape.

Leaves are nearly round and average 4 inches long and fragrant when crushed. Leaves are dark blue-green in summer. Smoketree is related to sumacs (Rhus) and is one of the few trees that equal their autumn color. Fall color is vibrant yellow, orange and reddish-purple.

The misty flower sprays resemble puffs of smoke emerging from the ends of branches. These sprays are smaller than those of the exotic species (Cotinus coggygria). The feathery flowers bloom in early spring, between April and May, and are pollinated by insects. American smoketree is dioecious, male and female flowers on separate trees. The male flowers tend to be showier than the female flowers. Small greenish-white flowers are borne in 6 to 10 inches long and wide clusters.

The bark is gray-brown and becomes scaly with age.

American smoketree is an outstanding small deciduous tree or large shrub. Trees can be used as a specimen or in groupings. Trees have intense fall leaf coloration.

Trees grow in neutral to alkaline soil in full sun. American smoketree is very adaptable and transplants easily. Plants are difficult to propagate from seed due to low seed set. Propagation is by vegetative cuttings. American smoketree was introduced into cultivation in the 1880s.

None of serious magnitude.

The seed are a choice food among native finches.

Relatively trouble-free given appropriate cultural conditions. It shares the brittle wood typical of other members of its family (Anacardiaceae), resulting in occasional storm damage. Prune damaged stems to a crotch or cut back to the ground and allow to start over.

The wood was used during the Civil War to make yellow and orange dyes; the tree was almost harvested to the point of elimination.

Two American smoketrees grow at the base of the hill below Abraham Lincoln’s tomb in Springfield, Illinois.