You are here: Home / Bernheim History / In Honor of Kentucky

Isaac Wolfe Bernheim was very patriotic; he loved America and, more specifically, he loved Kentucky. He was grateful for the opportunities he had received during the 50 plus years he lived in Kentucky, and he had great respect for the hard working and honest people of the state. “In Honor of Kentucky” is the title Isaac W. Bernheim gave to a chapter of his book, The Closing Chapters of a Busy Life. In that chapter, Mr. Bernheim describes donating the statues of Henry Clay and Ephraim McDowell to Statuary Hall in Washington, D.C.

Isaac Bernheim’s interest in providing these statues started during his visit to the Capitol in 1925. While walking through Statuary Hall, he noticed that Kentucky was not represented. In 1864, Representative Justin Morrill of Vermont sponsored legislation that invited each state to contribute two statues of prominent citizens for display in the hall. The first statue, Nathanael Greene of Rhode Island, was placed in 1870. The choice of individuals to be represented was left entirely in the hands of each state.

Upon returning home, Isaac Bernheim started the process of ensuring Kentucky was represented. He wrote to the Custodian of the Capitol to confirm the lack of Kentucky representation and to inquire if Abraham Lincoln was represented in the hall. His answer came from David Lyn, the Architect of the Capitol, the official responsible for maintaining the buildings, grounds, and art of the Capitol. To both questions, the answer was no. Mr. Bernheim passed the information on to Kentucky State Representative Leon P. Lewis of Louisville. At that point the effort to have Kentucky represented in Statuary Hall almost took an unusual turn. Representative Lewis wrote to the Architect of the Capitol to see if Jefferson Davis, born in Fairview, Kentucky, was currently represented. He wasn’t. That changed in 1931, when Mississippi chose to provide a statue of him, which remains in Statuary Hall today.

Some Kentucky lawmakers resisted allowing Mr. Bernheim to donate statues representing Kentucky because of his Jewish heritage. Senator Alben Barkley, a friend of Mr. Bernheim, used his influence to persuade the legislature to support the offer. On March 16, 1926, a joint resolution by the Kentucky General Assembly was passed accepting the offer, thanking Mr. Bernheim for his generosity, and designating a committee to choose the individuals to be honored. The committee consisted of the presidents of the University of Kentucky, Frank L. McVey; the University of Louisville, George Colvin; and Berea College, William J. Hutchins.

Consideration had been given to allowing Kentucky school children to nominate the two people to be honored. That turned out to be unfeasible as most of the children’s votes went to Abraham Lincoln while the remainder were widely scattered among others of varying import. Lincoln was eliminated from consideration due to the number of statues of him already in Washington, and, of course, the Lincoln Memorial.

The committee of three met in the Kentucky Hotel (now the apartment building known as the Kentucky Towers) in Louisville along with Mr. Bernheim’s personal secretary, Robert Paul. Henry Clay, the famed Senator and three-time presidential candidate was an easy selection, but a second choice proved to be more difficult. At this point, Mr. Paul, who grew up in England and had never lived in Kentucky, mentioned that he had recently read about the achievements of Dr. Ephraim McDowell of Danville. To confirm his impression that Dr. McDowell would be a good selection, Mr. Paul excused himself from the meeting and went to the University of Louisville School of Medicine Library to do some research.

Dr. McDowell was born in Virginia, received his medical education in Scotland, and then practiced medicine in Danville, Kentucky for his entire career. One of his early patients was a teenaged James K. Polk, the future President of the United States, for whom he performed a lithotomy to remove stones in his urinary bladder. Dr. McDowell did groundbreaking work in abdominal surgery and in 1809 performed the first ovariotomy. Dr. McDowell was famed for his medical skill and his insistence on a scrupulously clean operating environment.

Dr. McDowell was one of the founders of Centre College and part of a family of remarkable Americans. His father, Samuel McDowell, presided over ten conventions that resulted in the drafting of Kentucky’s first constitution and his father-in-law, Isaac Shelby, was twice governor of the state. He also shares the distinction with his great-great-grandson, General John Campbell Greenway of Arizona, of being the only two individuals in a direct line of descent to be honored in the Statuary Hall collection.

The decision having been made; Isaac Bernheim selected a sculptor to create the statues. He chose Charles H. Niehaus, a famed sculptor who had already created six statues for Statuary Hall. His total of eight statues would be by far the most of any sculptor featured in Statuary Hall (two of his statues, those of George Washington Glick and Zachariah Chandler, have been replaced by Michigan and Kansas respectively who wished to honor Gerald Ford and Dwight Eisenhower, however the six that remain are still the most by any sculptor).

The two sculptures were completed in January of 1929 and ready to be installed. Mr. Bernheim once again wrote to the Architect of the Capitol to arrange for their formal acceptance into Statuary Hall. By the third week of February, both were in place and ready for the ceremony. The acceptance ceremony was held on March 3,1929, with a large contingent of dignitaries present. The crowd size was undoubtedly boosted by the number of people in Washington for Herbert Hoover’s inauguration as the 31st President of the United States the following day. Eight-term Congressman D. H. Kinchloe of Madison, Kentucky, presided over the ceremony that included multiple speeches and musical numbers played by the U.S. Army Band. Mr. Bernheim chose to stay at his winter residence in Palm Beach, Florida, due to the prospect of cold weather in Washington. The Bernheim family was represented by two of his granddaughters, Anne Burnham, daughter of Palmer and Florence Burnham and Nancy Burnham, daughter of Morris and Delia Burnham, who unveiled the statues. 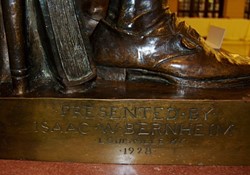 The statues remain at the Capitol. In order to allow 100 statues, two from each state, to be properly displayed and appreciated, only 35 remain in Statuary Hall. Ephraim McDowell’s statue was relocated, along with many others, and can now be found in the Capitol Visitor Center. All statues had to comply with certain requirements for size, materials (only marble and bronze are permitted – Clay and McDowell are both bronze) and the wording of the plaques. Kentucky’s two statues have an additional touch courtesy of Robert Paul.

Knowing that, with the passage of time, many visitors would remember neither the subjects nor Niehaus, he wanted to be certain the donor would not be forgotten. He bent the rules slightly and had the sculptor add an inscription on the base of each. Copies of these two statues were also given to Kentucky and are located at the state Capitol in Frankfort.

Bernheim Arboretum and Research Forest is another great gift from Mr. Bernheim that daily demonstrates his love for the people of Kentucky and America.

Much of the documentation used in preparing this article was available due to the research performed by Tom Block, Bernheim Trustee and great grandson of Isaac W. Bernheim.