You are here: Home / Actions Beyond Our Borders / Have you ever heard of a “Book-Pigeon?” 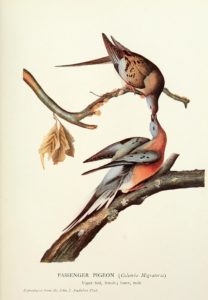 Last Friday I started finalizing a blog post for November. This is not that post.  Sometimes events overtake us and our priorities must change.  On Saturday, I had the opportunity to attend a presentation on Aldo Leopold. As a result, I knew I had to write an entirely different post than what I had planned. Aldo Leopold was a renowned naturalist, prolific writer, and passionate advocate for nature and all living things.  As part of that program we, the participants, were asked to select an Aldo Leopold quote and share with the group why we selected it.  The quote I selected was taken from an essay titled ‘On a Monument to the Pigeon’.   It was written in 1947 for the dedication of a monument to the extinct Passenger Pigeon.  I would like to share it now with you.

“There will always be pigeons in books and museums, but these are effigies and images, dead to all hardships and to all delights. Book-pigeons cannot dive out of a cloud to make the deer run for cover, nor clap their wings in thunderous applause of mast-laden woods. They know no urge of seasons; they feel no kiss of sun, no lash of wind and weather; they live forever by not living at all.”    Aldo Leopold

When I read these words, I was reminded of an image that I will never forget.  In 1972 ABC aired an animated after school special called ‘The Last of the Curlews’.  It was the story of a lonely Eskimo Curlew, its quest to find a mate, and the hardships it endured. The image that has stayed with me from that program is of a bird, shot by a farmer, slowly dying in a field. I was eleven years old. In researching, to double check my memory, I discovered that this program was based on a book of the same name by Fred Bodsworth.  It was published in 1954. The last recorded sighting of an Eskimo Curlew was in 1962. Almost ten years after the book was published. The Eskimo Curlew is now listed as “Probably Extinct”.

Then there is the Ivory-Billed Woodpecker. Although rumors persist and people are still searching, the last confirmed sighting was in the 1940’s. It is currently listed as “Possibly Extinct”. Perhaps we don’t want to face the truth.

Now, let’s get back to the Passenger Pigeon for a minute.  In 1813 John James Audubon wrote about a flock of these birds so vast that it took three days to pass overhead, at times dense enough that “the light of the noon-day was obscured as by an eclipse”.  It is estimated that there were between 3 and 5 billion of these birds in North America at that time. Due to over hunting and habitat loss, by 1910 they had completely disappeared in the wild. The last of the species died in 1914 at the Cincinnati Zoo. Only the “Book-Pigeon” remains. 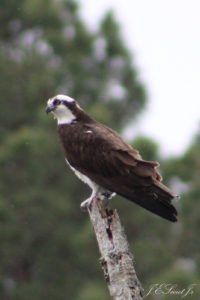 Thankfully, not all is doom and gloom.  There are stories of success as well that prove people can make a difference. In 1962, Rachel Carson’s ‘Silent Spring’ raised public awareness about the dangers of DDT and other pesticides. These pesticides were making their way up the food chain. Certain raptors were among the hardest hit; it made the egg shells of these birds very thin and extremely fragile.  Reproduction numbers plummeted. After the banning of DDT in 1972, both Bald Eagles and Osprey, once in danger of extinction, have been removed from the endangered species list. Their population levels have made a remarkable comeback.

In 1973 there were less than 50 Whooping Cranes left in the wild.  Today there are about 600, and the numbers are increasing steadily.

1987 saw the capture of the last few California Condors remaining in the wild. Thanks to human intervention, and a closely monitored breeding program, they were reintroduced to the wild four years later.  There are currently 463, and the efforts continue. 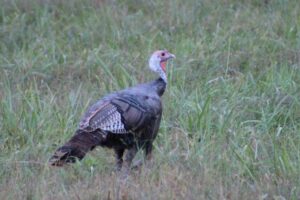 There is a success story closer to home as well.  Forty years ago Wild Turkeys had all but disappeared in Kentucky. Bernheim Forest was the perfect place to reintroduce gobblers to the commonwealth. As the flock grew in size, birds were trapped and relocated to other parts of the state. Today the estimated flock in Kentucky is between 400,000 and 450,000 Wild Turkeys. Some of these birds are now being trapped and relocated to other states.

Today, habitat loss is one of the greatest challenges facing not just birds, but all wildlife, plants included. As people keep building and expanding their footprint, more and more animals are being forced into smaller and smaller areas.  This is why large blocks of undeveloped land are so important. Although Bernheim Forest is now over 16,000 acres, continuing the expansion of the forest is an ongoing endeavor of which you can be a part.

There are folks right here in Kentucky who are unfamiliar with Bernheim’s vision and mission. “Bernheim will be a nationally treasured leader in ecological stewardship that inspires the exploration of our deep connections with nature.” This is the vision. “Connecting People with Nature” is the mission. It’s our job to spread the word. We need to use our voices to be advocates for those things that cannot speak for themselves. We may not have the eloquence of an Aldo Leopold, but we can still share the passion we have for all living things.

If we work together to raise awareness and seek answers, surely we can find the balance needed to help nature thrive, and maybe, just maybe, we can leave future generations something more than just “Book-Pigeons”.