You are here: Home / Bird Research / Harper update: his return to Canada

Our most recent update on Harper’s Location shows that he has entered into Canada.  After crossing over the eastern tip of Voyageurs National Park, he flew north then over the Rainy River District of Ontario. Here the boreal forest, a forest made up of primarily coniferous trees, begins in an area known as the Canadian Shield, a landscape where retreating glaciers have created a multitude of wetlands and rivers and exposed rocks up to 3 billion years old. This route follows a path just 3 miles from his route in 2015.

Again we see the high resolution GPS data detailing how his high climbs are followed by long descents. This is typical of thermal soaring, where rising columns of warm air allow for rapid altitude gains with little energy expenditure. On one such ascent Harper flew upwards for 2660 feet (nearly ½ mile) in just four minutes. He then soared downward nearly four miles before making another climb. 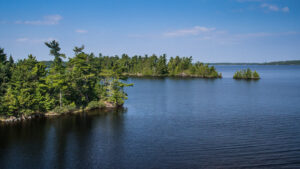 It seems that Harper knows his route well and is doing his best to conserve energy during the migration.  These energy saving strategies require a complex understanding of weather and geography. Returning to the northern breeding grounds in good shape and ready for nesting season is critical for migratory birds. While he might have spring nesting season on his mind, the weather still looks a lot like winter in Canada with a wind chill of -8 degrees Fahrenheit in his location tonight.

Stay tuned as we continue to follow Harper on the second half of his spring migration.