You are here: Home / Bernheim History / Frank and Jesse James’ Time at Bernheim 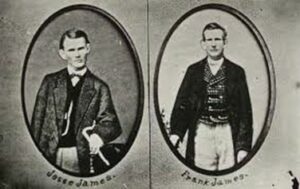 Frank and Jesse James are familiar names to most.  At times, they have been made out to be the Robin Hoods of the latter part of the 1800s. They were certainly not that. The pair had a long career of criminal activities and are best known for their numerous bank and train robberies and the murders that came with them. Their connection with this area, particularly Bullitt and Nelson counties and the land on which Bernheim Forest is located, is much less known.

The two infamous brothers were natives of Missouri with roots in Kentucky. Their father, Robert James, was born in Lickskillet on Whippoorwill Creek in Morgan County and their mother, Zerelda Cole James, was born in Woodford County. Robert and Zerelda were married in Stamping Ground, Kentucky, but soon moved to western Missouri where the boys and their sister were born.

Alexander Franklin James was born January 10, 1843 and Jesse Woodson James followed on September 5, 1847. Their father worked both as a pastor and a farmer. He left the family behind to join the California gold rush and passed away from illness in 1850. Zerelda then married Benjamin Simms who quickly deserted the family and subsequently also died of illness. Her third and final marriage was in 1855 to Dr. Reuben Samuels. Dr. Samuels was a cousin of T. W. Samuels of Deatsville and Samuels Depot in Nelson County. T.W. was the third in a family line of distillers whose descendants would become famous for Maker’s Mark bourbon. Importantly, T.W. was also the High Sheriﬀ of Nelson County, Kentucky.

The onset of the Civil War became pivotal in the James brothers’ history. Frank would join the Missouri Home Guard in 1861, a group aligned with the Confederacy, along with his friend and neighbor Thomas Edward (Bud) Pence. Both later became members of the guerrilla band led by William Quantrill and William “Bloody Bill’ Anderson (a native of Hopkins County, KY) and known as Quantrill’s Raiders. In 1864, Jesse and Bud Pence’s brother, Alexander Doniphan (Donnie) would join their brothers. The Raiders caused great havoc over a wide area including Missouri, Kansas, and Kentucky. After Anderson was killed, Jesse followed another guerrilla leader, Archie Clement, into action in Texas.

Early in 1865, Frank James was with Quantrill’s Raiders while they were involved in numerous deadly actions in central Kentucky. Among those was an incident just outside of Midway, Kentucky. They raided John Harper’s Natura Horse Farm and stole several of his thoroughbreds. During a gunfight, Adam Harper, John’s younger brother, was killed. In an odd footnote, fifteen years later, Isaac Bernheim would borrow John Harper’s surname when he debuted his signature product, I. W. Harper bourbon. There is no evidence that Mr. Bernheim had any knowledge of that Civil War action. He was a sixteen-year-old living and working in Frankfurt, Germany at the time.

On July 26,1865, some months after the war had ended, Frank James, the Pence brothers, and many others would surrender to James’ relative by marriage, High Sheriﬀ T. W. Samuels, at Samuels Depot. They were quickly pardoned and released by Kentucky’s military governor, Major General Robert Palmer.

The end of the war did not mean the end of violence and crime for the James brothers. They soon formed a criminal gang with the Pence brothers, Cole Younger and his brothers, and others. The next several years would see the gang with an ever-changing membership involved
in train and bank robberies in several states including Missouri, Kentucky, Tennessee and Minnesota. Between robberies, the James brothers needed to be where they would be safe from the law. One of those areas is now part of Bernheim Forest. It was attractive as a hideout because their relatives, the Samuels family, lived nearby. The Pence brothers married sisters who were members of the Samuels family bringing the two groups even closer together.

At about that time, William Hatfield purchased a farm on what is now Bernheim land. Hatfield was a native of  West Virginia and a member of the Hatfield clan of the famed Hatfield-McCoy Feud. His son, Samuel McKay Hatfield, formed a friendship with the James brothers. They hunted squirrels together and went swimming in Long Lick Creek. Frank and Jesse were said to have a cabin near where Bernheim’s Old Headquarters Building would later stand at the junction of Old Headquarters Fire Road and KY 245. Some reports said that they also took
shelter in a cave, possibly the one in the area at Bernheim now known as Cave Hollow, but the brothers claimed that they never resorted to living in caves.

Jesse James would meet his fate in St. Joseph, Missouri, when he was murdered by a member of his criminal gang, Bob Ford, on April 3, 1882. Frank eventually found his way to a more lawful existence and had a variety of jobs including shoe salesman, ticket taker at a burlesque theater, and part owner of a wild west show. He died on February 18, 1915. Fourteen years later, Isaac Bernheim founded the IW Bernheim Foundation, which manages Bernheim Arboretum and Research Forest.

Bernheim is now known of a place of peace and serenity. Gunfights and robberies are strongly discouraged.