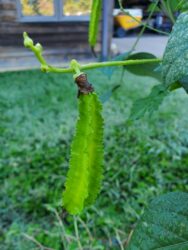 The Winged Bean (Psophocarpus tetragonolobus) is a tropical herbaceous legume plant that probably originated in Papua New Guinea. It is also known as four-angled bean, four-cornered bean, Manila bean, princess bean, dragon bean as well as cigarrillas and goa bean by various world cultures and is popular throughout Southeast Asia.

The fruits are lime green, elongated, square in cross section, with four longitudinal sinuous leafy wings that taper at their ends.

All parts of the plant are edible and are nutrient-rich: the flowers can be used in salads; the leaves eaten like spinach; the nutty- flavored tubers, which have significantly higher protein levels than potatoes and yams, can be steamed or eaten raw. The tender pods, best eaten before exceeding 1 inch in length, can be either sliced thinly in salads or sautéed, but are often harvested when they are between 2 and 4 inches long; the mature beans produce seeds require cooking to destroy the trypsin inhibitors and hemagglutinins that inhibit digestion. The mature beans can then be dried, roasted, or ground into flour to be combined with rice or other vegetables. 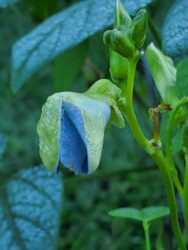 Winged beans are an excellent source of copper, iron, manganese, and many essential amino acids; tryptophan, threonine, isoleucine, leucine, lysine, and valine. In addition, the abundance of protein, fiber and B vitamins, make the winged bean an excellent food source for both humans as well as animals.

Winged beans have been difficult to grow in the USA due to the difficulty of flower production, and therefore seed pods, because of specific daylight requirements. However, varieties from China (Hunan) and Japan (Urizun) have proved to be daylight neutral and allow the bean to be grown successfully.

Seeds should be scarified and soaked overnight before starting in a soilless mix. A heating pad with temperatures between 77 and 85 degrees will aid germination (5 to 7 days). Seeds should be started two to three weeks before the last frost, and not transplanted until any chance of frost has passed. A rich, well-drained soil is preferred but not required as the tuber is capable of stabilizing nitrogen in the soil. Winged beans grow well in moist soil but should not be overwatered. The plants should be grown in sunny locations where there is minimal excessive heat (<90) in the afternoon. Seed pods develop near the end of the growing season when the nights are cool but short. Feeding with compost is the best way to grow healthy, strong plants.