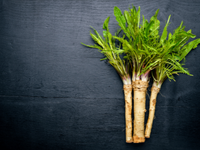 Horseradish (Armoracia rusticana) is a tough, cold-hardy, clump-forming perennial that produces long taproots that look like white carrots. Originating from southeastern Europe and western Asia, it has been cultivated since antiquity.

It is grown for its sharp spicy flavor but also for horseradish peroxidase, an enzyme used extensively in molecular biology and biochemistry. 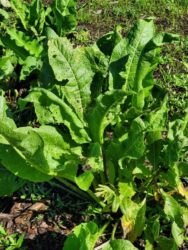 Horseradish sends up coarse, elongated, emerald green leaves that resemble curly dock. Usually, the leaves are 12 to 20 inches long and arise from fleshy, branching, cream-colored roots. However, plants have grown to a height of 5 feet. The taproot, if left undisturbed for several years, can get as deep as 10 feet with a tangled mass of secondary roots and rootlets spreading horizontally to several feet.

The plant is normally propagated from root cuttings in late winter or early spring, setting the root horizontally in a 3- to 4-inch-deep trench and covering with 2 inches of soil. It is grown in fertile, moist, but well-drained soil in full sun.

Horseradish can also be grown from seed indoors in January and February, for transplanting out in April. If time is not an issue, seeds can be sown directly into 45 to 75°F soil at a depth of ¼ to ½ inch. They will sprout in 7 to 15 days.

Once established, horseradish plants should be watered freely to prevent the roots becoming woody. Root development can be encouraged by removing the white flowers that form during the summer. The roots are harvested from November through March. Cleaned and dried roots can be stored in a perforated plastic bag in the refrigerator for 3 months. 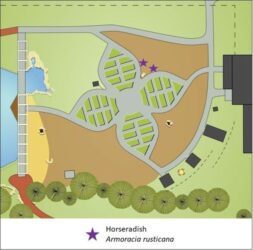 Although intact horseradish root has little smell, when the root is grated, chopped, or crushed, released enzymes digest the root’s glucosinolates forming allyl isothiocyanate. This is the pungent but relatively unstable ingredient in fresh horseradish sauce.

Normally, horseradish roots are made into a sauce, grated and combined with vinegar, mayonnaise, salad dressing, or sour cream; lemon juice, mustard, or beets have also been used.

Nutritionally, horseradish is high in vitamin C, containing more than most common fruits including oranges. Native Americans used it to prevent scurvy and to increase perspiration as a treatment for the common cold.