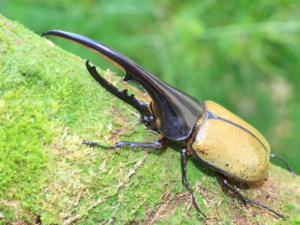 It was a misty, serene morning, and I was bracing myself for the peace to be broken shortly by the arrival of fourteen rambunctious campers. Two had already arrived and were up by the Silos with their parents using the restroom before the day began. I was carefully arranging water bottles and supplies when one of the campers came sprinting down the path. “We just found the biggest beetle ever! It has a horn!” My meticulous arrangement was ruined as I unceremoniously tossed the last bottles on the table and took off to see what curiosity they had found. When I reached at the Silos, we found not one, but four, of the largest beetle in the eastern United States, and my personal favorite insect of all time.

The eastern Hercules beetle, Dynastes tityus, is truly a wonder to behold. This beauty can reach up to 3 inches in length, and males sport two enormous horns on their head. Like most creatures with literal weapons on their face, these horns are used for fighting other males over the privilege to impress the ladies. The females, for their part, are typically a bit smaller than males and do not possess such striking features. Both have stunning coloring, typically bright green with black spots. Interestingly this color is humidity dependent, as the shell absorbs moisture and helps the beetle remained camouflaged in different situations. When the beetle is crawling above ground where humidity is lower, they are green. When below a log or in the dirt where humidity is higher, they become a darker brown color.

Despite its impressive size and ferocious facial features, Hercules beetles are quite harmless to humans. Their clawed feet will grip quite tightly, possibly feeling like a pinch if you pick them up, to the point where it takes quite a bit of careful effort to have them release you without injuring the insect. In fact, my co-counselor had one on her finger for nearly an hour that day before we were able to wriggle it off, much to the campers’ amusement. But they won’t stab, bite, sting, or otherwise intentionally harm humans: the worst they’ll do is scratch you with their spiny legs. Being so large, many may expect the Hercules beetle to ferociously feast upon other insects, but the reality is that they are gentle giants, deriving nutrition from rotting fruits or decaying wood. They make for excellent decomposers, ambling about the forest floor cleaning up detritus.

The larvae of this insect are fascinating as well. These monsters can reach a whopping 4.5 inches in length, though the odds of you seeing one are rather slim. This is because they spend the entirety of their lives below ground or in dead wood, gorging on the decaying plant material. That’s probably good for them, as they are a delicacy to many creatures who would love to slurp these grubs up. The amount of nutrition a larva consumes directly impacts how large of a beetle it will become, so these larvae spend six to eighteen months eating and growing. Once they’ve molted twice, the larva becomes a pupa, which is similar to a chrysalis, and stays in that form for a few weeks before emerging as an adult.

Here at Bernheim, these beetles typically turn up mid-summer. Why we found four at once, I am not entirely sure, though I have my guesses. Perhaps they all had recently emerged and were clambering out of the soil for the first time. Another possibility is there was a female in the nearby vicinity: they emit pheromones to attract males, and all we found were males in the shadow of the Silos, some of which bore wounds from fighting amongst each other. Either way, the campers were dazzled by these giant creatures, and I was grateful they graced us with their presence.

While finding them out in the open the way we did is somewhat rare, Hercules beetles can occasionally be found in the forest. When out on the trails, gently push away decaying leaves or roll rotting logs to see if any critters lurk beneath, before carefully replacing what you moved. Even if you do not see the mighty Hercules beetle, I guarantee you’ll find a whole host of other curiosities. From interconnected webs of mycelium to colonies of ants, many legged millipedes to the ever-enigmatic salamander, there is a world of strange and beautiful things beneath our feet. All you’ve got to do to reveal it is be willing to get your hands a little dirty.