You are here: Home / Archive / Bugs of Bernheim / Bug-A-Palooza Daily Bug: Ants – The Most Fascinating Insects? 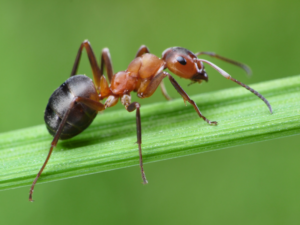 Ants. Three body parts, two antennae, six legs, usually black or brown in color and not large at all. The generic insect, the one you study in first grade when you learn what an ‘insect’ is. As a child, I thought nothing of ants. They were a nuisance insect who would invade my plate during picnics and built mounds perfect for me to kick over in an act of retribution. As an adult, I have come to find that ants are perhaps one of the most complex, fascinating insect families around, and are so often overlooked due to how ordinary and common they appear on the surface.

Ants have so many interesting facets it will be hard to pick just a few to describe, but let’s start with group dynamics. Every species of ant lives in a colony of sorts, ranging from a few dozen individuals in a small burrow to millions across a wide territory. In the larger colonies each ant has a job, and there is a distinct division of labor across the group. You’ll find the egg-laying queen, male drones who attend the queen, soldiers, and workers who do everything from harvest food to nursing the larva. These individuals communicate using pheromones, sound, and touch, allowing the group to act in a unified manner as well as nearly immediately responding in dire situations. 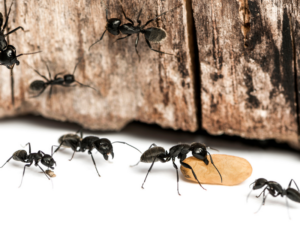 There are countless examples of ants working as one unit. There are the fire ants who, during the Texas floods, were observed linking limbs to form life rafts and keep afloat, constantly rotating so no members drowned. Some ants are incapable of feeding themselves and rely on capturing larvae from neighboring colonies during raids to survive, using the captured workers to collect food.  More locally, you will often find long lines of ants walking in formation, because ants who find food release pheromones as a scent trail for others to follow, but not before using visual, tactile, and solar cues to find the shortest route home. My campers this summer were enthralled by a coalition of ants painstakingly dragging a dropped potato chip up a tree trunk: after viewing dozens of individuals work to move it a few feet, a child promptly dumped more chips on the ground ‘accidentally’ to keep the show going.

This ability to operate as a cohesive group can make for some riveting displays, like the time I observed a full-scale ant battle between two opposing colonies. I found two parallel lines of ants on a garden wall, every ant an inch from its comrade and its enemy. The two lines appeared to be two separate colonies, as the occupants of each varied slightly in appearance. They stared each other down as smaller ants from each faction scurried behind their defenders, gathering the wounded from the wreckage and dragging them back to their burrows. As I walked down the lines I’d find pockets of fighting, soldiers gripping one another with their pincers to either rip off limbs or toss the enemy off the ledge atop which they had made their battlefield. But the real action was at the ends of the line, at the entrances to the nests. Here, the carnage was immense – literal piles of ants around the entrances as the largest soldiers from each colony defended against the attackers of the other.

This was one of the most impressive displays of animal warfare I have ever witnessed, and it came from a creature that I had up until that point written off as ordinary. But ants are complex in more than just combat. In fact, they are rather agrarian at times, and it has been found that some species of ants actually tend to herds of aphids. Aphids produce a waste product called honeydew, which ants will collect and take down to their colonies to be feasted on due to its sweetness. Some ants have even found ways to milk the substance, and are able to collect it at will. However, this relationship is symbiotic, as aphids benefit from the ants’ presence. Ants will defend their herds from potential predators, gather the aphid eggs to store them through winter, and move their flock to better locations if food runs low. In fact, if the ant colony itself migrates elsewhere, they often bring the aphids with them, so they don’t lose their precious honeydew.

If you happen upon a group of ants while hiking or strolling through the Edible Garden, do spend some time observing. It’s incredible how quickly they recover when you accidentally unearth their larvae, or how rapidly a single ant returns with dozens after discovering a food source. These seemingly inconsequential creatures often provide rather mesmerizing shows, moving in tandem to achieve whatever goals they set their hive minds to.