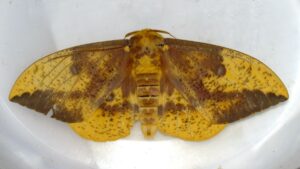 Related to the giant silkworm moth, the Imperial moth, Eacles imperialis, is one of the largest in North America, reaching up to 7 inches across. Not only is it one of the largest moth species, it is also one of the most variable. This unique variability helps to protect it from predators, as predators have a difficult time fixing a concrete image of the moth as prey.

The Imperial moth lays its eggs on host plant leaves, taking two weeks to hatch into caterpillars. They pupate and overwinter underground. Most emerge in the fall, except for in the extreme south, where two generations can be supported each year. When adult moths emerge, they are largely motionless, allowing them to blend in with the surrounding color of fallen brown and yellow leaves.

The female Imperial moth is usually larger and less colorful than the male. Males tend to display more browns and muted purples. Both, however, are such a wonder to encounter, as you rarely get to see such a large and fascinating moth species.