You are here: Home / Bird Research / Athena Returns to Bernheim 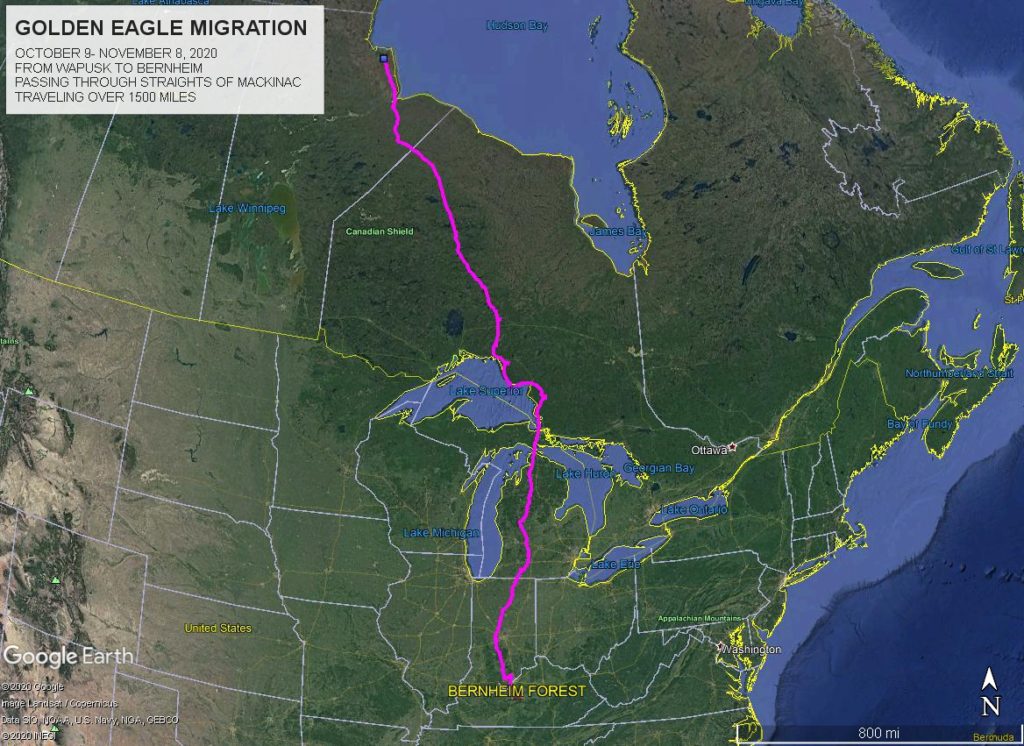 On November 8, 2020, the female golden eagle, Athena returned to Bernheim after 6 months in Canada. She completed the 1500-mile migration by navigating familiar territory along the knobs of Indiana before crossing the Ohio River into Kentucky near West Point. From there, she crossed Fort Knox and used the Crooked Creek Wildlife Corridor as she headed towards Bernheim. Her southern migration took exactly 1 month, having begun on October 9, 2020. 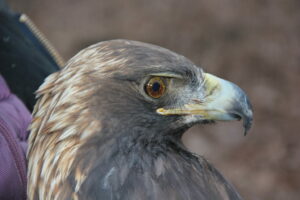 Using familiar locations and landmarks as she navigated her course, Athena passed through the Great Lakes at Mackinac Straights in Michigan. Amazingly, the ornithologists that monitor bird migrations at Mackinac Straights Raptor Watch were able to count her flying over St. Ignace, MI. We know this by using time of their sighting compared with her location as recorded with GPS, which also tells us she was flying 54 miles per hour at a height of 2300 feet. Special thanks to the great work at Mackinac Straits Raptor Watch for all they do to monitor birds and educate people about this critical migratory passage through the Great Lakes.

Upon her arrival at Bernheim, we documented her flight directly into the territory she shares with her mate, Harper. She landed in the same trees, flew over the same fields, and sat on top of the same knobs as in previous winters. This behavior has been well documented for many years now, with these golden eagles having strong preferences for roost trees and hunting locations, behavior also seen upon arrival to their Canadian territory in spring. Her last GPS location showed her flying over to Knobs State Forest to visit a favorite knob in the large interior forest.

Harper has not made it back to Bernheim yet; he is traveling a separate migratory path through Wisconsin. GPS locations show he has again taken a migration break in the rugged hills of western Wisconsin, traveling back and forth across the rugged topography. We have seen this behavior in previous years, with extended periods spent in this section of Wisconsin in both spring and fall. Over the coming days we expect to see Harper head south again and reunite with Athena in Bernheim. Stay tuned for their reunion, and for more information about their migrations and summer activities.