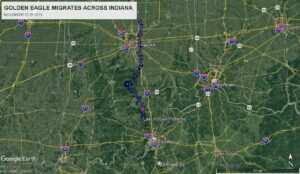 Athena, the female golden eagle we’re tracking, is headed south across Indiana towards Bernheim. On November 24, 2019 she was located west of Salem, and had corrected course to travel directly towards Bernheim. She displayed some interesting behavior over the past few days.

On November 19, Athena roosted on the Yellow River, where she was using a small riparian forest for several days, possibly hunting and resting during the long migration. You can see the limited aspects this woodlot offers, and the challenges migrating species face when crossing large agricultural expanses. 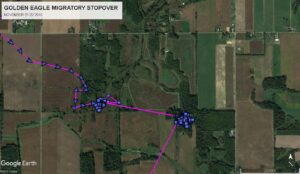 On November 20-22, she used a stopover near Eddy Creek of Tippecanoe River. These small woodlands were used for several days, possibly for hunting or resting. The data suggests she may have been still hunting, as eagles will sit in a preferred location for long periods of time waiting for hunting opportunities to develop.  Another possibility is that a scavenging opportunity may have attracted her to stay at this location for several days. 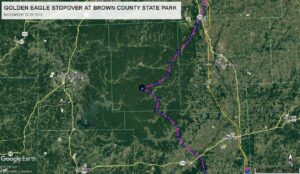 On November 22, Athena headed south directly towards Indianapolis. She veered east to go around the city, passing 10 miles from downtown at speeds of around 45 miles per hour at heights of about 2000 foot above the ground. After passing the large city, she turned west during the approaching bad weather we saw last weekend. The rain and wind forced her to land in the protected forests of Brown County State Park. From aerial imagery it looks like a forested hollow was used to ride out the weather that lasted much of November 22-23, 2019.

The male golden eagle, Harper is presumed to be in the Bernheim area but hasn’t checked in for a few days. He is likely hanging out down in some hollow, possibly waiting for Athena to return. It will be interesting to see what Athena’s final migration route will be. Questions remain as to whether Athena will end up in Bernheim, will she reunite with Harper, what efforts will they need to find each other if she returns, and will they continue to defend their winter range together? Stay tuned!!!!