You are here: Home / Bird Research / Athena Approaches Bernheim as She Enters Indiana 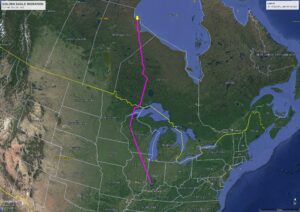 Athena, the golden eagle that winters in Bernheim Forest, checked in on November 15, 2022, in Indiana headed towards Patoka Lake and Hoosier National Forest. The map to the left shows a rough idea of her migration route this fall.

Athena began her trip south across Wapusk National Park on October 16 and made her way towards the west side of Lake Superior. On October 31, she entered northern Wisconsin. The next check-in was from Indiana on November 15, as she headed into the final stretch of her migration. Southern Indiana is familiar terrain for her, as she has frequently used Brown County as a stopover during previous migrations. It is possible she has already crossed the Ohio River and made it to Bernheim, but we have not received an official check-in yet.

Stay tuned as we follow Athena on her trip south and see if she will return to Kentucky for the winter.

A special thanks to Beckham Bird Club, Cellular Tracking Technologies, Conservation Science Global Inc., and all the supporters of Birds of Bernheim that make this incredible project possible. The support from Bernheim’s members, volunteers, staff, and donors are what allow us to protect wildlife and steward their habitats.