You are here: Home / Artist-in-Residence / A conversation with Artist in Residence Anthony Heinz May

2018 Artist in Residence Anthony Heinz May is a sculptor from Brooklyn, NY who alters the state of living things and natural compositions with trees. This past August, Anthony fulfilled his residency at Bernheim and repurposed a Honey Locust tree, previously slated for removal, into a work of art. Prominently located in front of Bernheim’s Education Center, this freestanding and rooted dead tree makes for a perfect natural base, connecting with the earth and then breaking into space through the artist’s detail-oriented process of deconstruction and reconfiguration of the tree’s main branches. Titled Entgötterung, this tree sculpture looks as if nature has been digitally compromised and pixelated, exposing relationships between nature, humans and technology.

The following are excerpts from a conversation I had with artist Anthony Heinz May about his experience at Bernheim while in residence and the meaning behind Entgötterung. 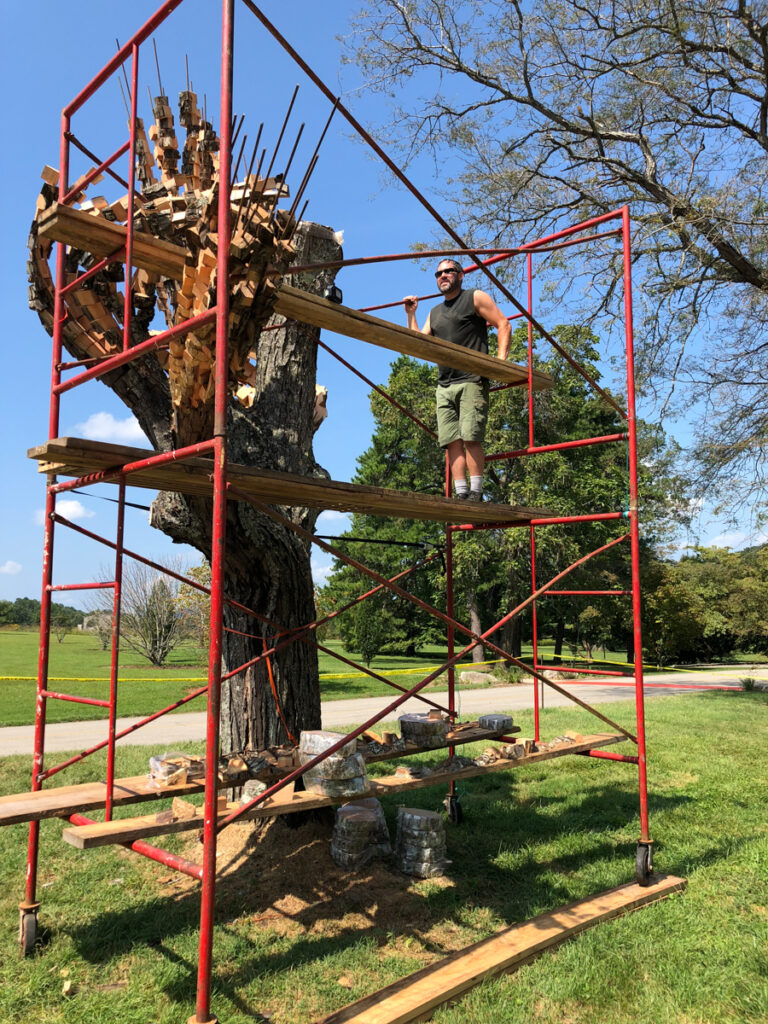 Jenny Zeller: A “studio outside” publicly allows for our visitors to experience a work in progress that most residencies don’t offer. I am interested in the way you were able to engage with the public and the reactions received during the installation of your work.

Anthony Heinz May: All the experiences I had at Bernheim were unique and special.  Many walkers stopped by and spoke with me regularly throughout my time on site.  Some remarked, ‘they had been watching it change over the weeks’ and ‘had no idea what I was going to do‘.  I spoke with locals, people from places across the USA including California, Florida, Texas, Georgia and New York, and I even met people from Germany, Pakistan, Mexico, France and Canada.  One of the many visitors from Louisville and I discussed economics involving renewable and non-renewable energies.  Another local immediately saw the tree as being pixelated, describing it as digitized.  Some people asked, ‘what happened?’ and ‘if I was putting the tree back together again?’

I heard applause, short horn-taps and thoughtful comments from cars either stopped or driving by.  At one point there was a motorist who angled his car in the two-way road so he could get a better view of the sculpture in process. Parked in the middle of the road with door ajar, he stood there and had a lengthy conversation with me.  Traffic had to drive partially in the grass to get around him.  I felt an overall and general sense of kindness and support.

The staff at Bernheim stopped by the install site periodically while en route from one side of the park to the other, asking me if I needed anything.  A few brought me water and even snacks.  I got lifts on the gator from time to time, and talked with the Rangers while they circled the grounds to close the arboretum.  Those trips with the Rangers helped me understand so much about the park, area and visitors through everything they had seen in their time there. 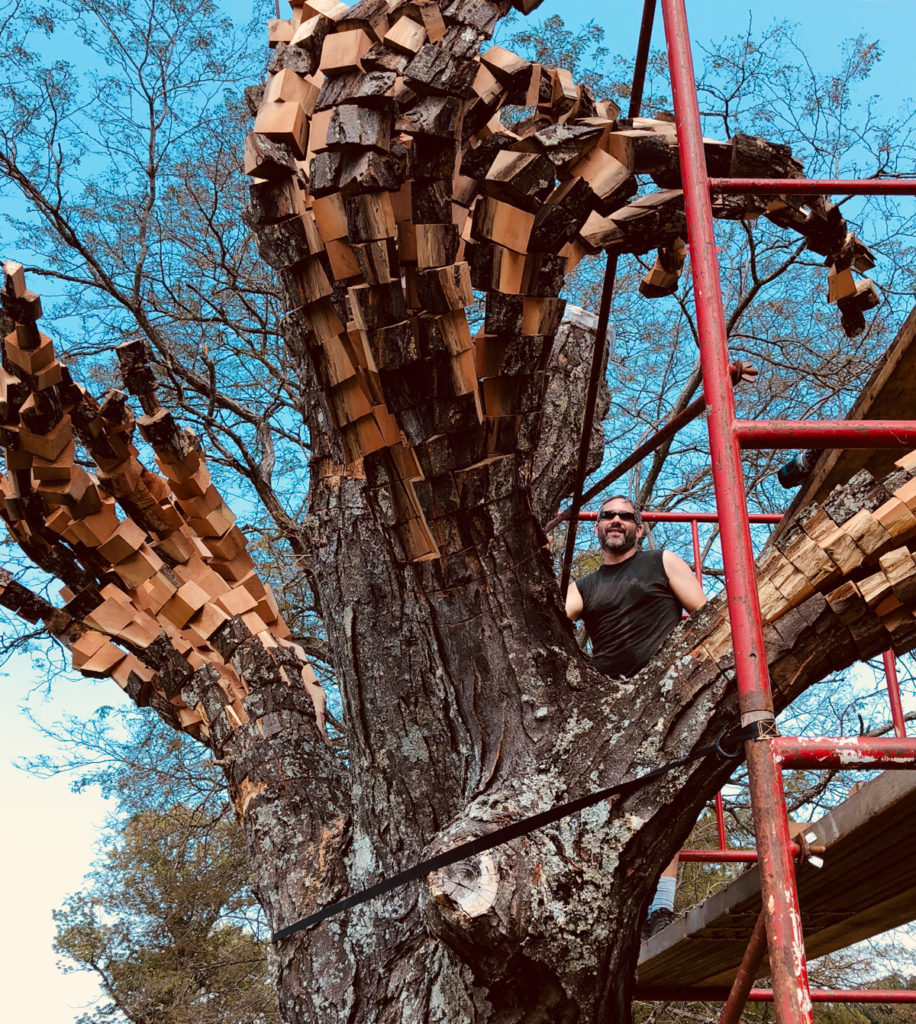 JZ: Is there anything about this residency that was unique or different from others you have done in the past?

AHM: Bernheim offers so much to see and do. There were multiple events at the arboretum while I was in residency, including SONICBernheim and CONNECT.  The Canopy Tree Walk is an amazing viewpoint while giving a feeling of floating in the treetops.  As an artist working with dead/degrading trees, this is a place I would love to return to and spend more time just to sit and draw in the shade of so many various amazing tree species. Having spent comparable amounts of time in residencies living with other artists as in a colony setting or being the only artist at the time of residency, Bernheim offers a balance of both. I spent time with the other artist in residency Ashley Peevor as ours overlapped which was great, inasmuch we both had our own individual focus.  The artist accommodations were bucolic and serene as if from a book.  They offered a quiet, ideal place for reflection and relaxation.

A most unexpected experience in my time at Bernheim was falling asleep to the sounds of enormous claps of thunder, rattling the house within a downpour of rain.  The brilliant storms lasted sometimes for hours, which added to the sense of independence and solitude. Then waking up the next morning to the sounds of artillery shelling way off in the distance of Fort Knox grounds.  The coupling of these disparate but existential happenings together in the same place was mesmerizing.  I could not tell the difference between the two at moments, except for the consistency of ammo fire and irregularity of the thunderous claps in the storms overhead.

JZ: Can you explain the meaning of the title in your work  “Entgötterung”?

AHM:  When Isaac Wolfe Bernheim offered his vision for the Bernheim Forest, parts of it included equality for all people visiting and no discussion of politics or religion.  Whether Bernheim was truly religious or invested any real interest in politics or not, he did not want visitors to compromise this landscape with spoken rhetoric of what might destroy the essence of a place preserved for viewing and reconnecting with nature. The German word Entgötterung translates as de-deification or de-godification. This title is inspired by a re-centering of self, inasmuch a release of oneself from human intentions to deify and objectify existence.

A forest is a place for one to become more aware of oneself and simultaneously reconnect with nature.  It is a refuge of release, to rid oneself of the oppression typically found in various programs of the institution, especially those Isaac W. Bernheim vehemently opposed to be discussed while in the sanctity of the forest.  With an ever-present extension of the world beyond the physical one lived and moved within, from just inside our pockets and screens in our vehicles, it has become increasingly difficult to find the particular solace Bernheim envisioned for the forest and our natural being.

JZ: What will you remember most about your time at Bernheim?

AHM: Listening to Beethoven and Tchaikovsky on an old fuzzy record player unit in the evenings while cooking to the quiet pings of falling rains on the window. Watching deer through the window as they strolled across grass in front of the lodgings. Tasting fresh herbs and vegetables from the Edible Garden, and all the delicious dishes created with them by Isaac’s Café.  The smells of the forest and magical feel of the Honey Locust while working with it; these are a few moments of the special nostalgia I hold for Bernheim and my time spent there.

Anthony Heinz May has completed numerous public installations in recent years, including locations at McKinley Park in Chicago, Governors Island, Manhattan, Quebec and Roanoke, VA. Notable awards and residencies include an Emerging Artist Fellowship Commission from Socrates Sculpture Park in New York, Process Space in Manhattan and a Djerassi Artist Residency in Woodside, CA, to name a few. His work has been supported by Chicago Sculpture International where he participated in the Chicago Tree Project where artists turn sick trees into works of art.