You are here: Home / Bird Research / A History of Birding at Bernheim

Bernheim has long been known as an excellent location to find a wide variety of birds. Some of Bernheim’s visitors travel to the forest specifically to see birds, while many others find that the bird life adds to their enjoyment in being in the forest and arboretum. Pleasing to the eye, birds are the jewels of the forest, coming in a wide variety of colors, shapes, and sizes. Many sing beautifully and offer an astonishing array of songs. Their behavior can be a delight as they search for food, build their nests, tend to their chicks, and often seem to show off for the pure joy of it.

Birds are important for reasons beyond the enjoyment they provide; they are vital for the forest environment. Some birds pollinate plants. Others distribute nuts and seeds and help trees and other plants repopulate the forest. Many others eat insects and help keep those populations in balance. Raptors such as owls, hawks, and eagles help control the population of rodents. Among the most valuable of birds are turkey vultures and black vultures which do a wonderful job of being our cleanup crew by eating diseased carrion without becoming sick themselves or spreading diseases to other animals, including humans.

Birdwatching at Bernheim has grown in popularity as the bird population has grown and number of species has increased over the years. This didn’t come about by chance. The environment has changed and made Bernheim a more welcoming location than it was in 1929, when the Bernheim Foundation first acquired the land. When Mr. Bernheim bought the land, some skeptics believed that he was wasting his money on a large bird refuge. In fact, early visitors to the forest noticed a scarcity of birds – and other wildlife. It should not have been a surprise – the trees had been cut and the land had been abused and neglected for many years. When the land was protected the forest began its journey toward becoming a healthier ecosystem that was more welcoming to bird and other animal populations.

In the early 1930s, the Chief Forester, Thomas McKinley constructed a birdwatching area south of what is now Hwy 245 across from the James B. Beam distillery. He built a blind, a feeding station, and improved and covered a spring to provide a source of fresh water. Mr. McKinley would shortly move on to another job, and, unfortunately, the birdwatching area fell into disuse and was reclaimed by nature.

The forest has grown and now contains many more mature trees for birds to find food and shelter in. A former meadow of a large expanse of grass has been replaced with the Big Prairie that grows a wide variety of native plants where birds can find seeds and insects for nourishment. Lake Nevin and the Olmsted Ponds were constructed and now provide habitat for the many birds that thrive in a water ecosystem. There are now wetlands that attract many birds including the Cypress Tupelo Swamp at the south end of Lake Nevin. With a wide array of bird habitats, Bernheim now attracts numerous birds and birdwatchers alike.

The birds found their own way back to the area as the environment evolved and improved, with one notable exception. The wild turkey, Meleagris gallopavo, had vanished from this area in the last century due to habitat loss and unrestricted hunting. Three attempts to reintroduce turkeys were made. The first used farm-raised birds. The second was with wild-caught turkeys that had been kept for some time on a farm before being procured for the forest. These partially domesticated birds had a low survival rate in the wild and many were quickly killed, often by wild dogs. In 1982, recently captured wild turkeys were successfully released. Those turkeys were obtained in a complicated three-way trade that involved river otters from Alabama, catfish from Louisiana, and the turkeys from Missouri. That effort was successful, and wild turkeys are now plentiful at Bernheim. 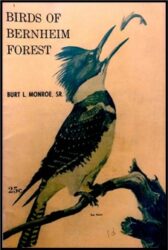 Several members of the Bernheim Foundation board of trustees have been avid birdwatchers. Among them was Burt Monroe, Sr. Mr. Monroe was an insurance executive who had no formal education in the sciences but was a highly regarded expert in the birds of the area and beyond. He was a founder and the first president of the Beckham Bird Club, a member of the American Ornithologists’ Union, and a member of many other organizations devoted to the study and protection of the natural world. Mr. Monroe was the Bernheim Foundation President from 1965-66, and authored a booklet, Birds of Bernheim Forest. That book remains a valuable guide. He identified a total of 168 different bird species, 101 species which had been observed as nesting at Bernheim Forest, thirteen that were winter residents, and 54 others which he listed as “visitants or migrants”. He also listed nine species that he suspected might be found at Bernheim but had not yet been observed. The cover of Birds of Bernheim was illustrated with a belted kingfisher painted by Ray Harm.

In the 1960s, artist and naturalist, Ray Harm helped to popularize birdwatching by creating collectible prints of his paintings of wildlife. Mr. Harm lived on the eastern border of Bernheim Forest and often went to Bernheim to make the sketches that were the basis for his paintings. He eventually painted nearly 150 different bird species, many of them from his observations at Bernheim Forest.

Following the death of Burt Monroe, Sr. in 1968, his son Burt Monroe, Jr. was selected to take his place on the Bernheim Foundation board of trustees.  Burt Jr. was so interested in birds like his father that he became a scientist with a doctorate in the field. He was the Chair of the Biology Department at the University of Louisville, President of the Louisville Zoo Foundation, a Fellow in the American Ornithologists’ Union, the Kentucky State Ornithologist, and a Fellow of the American Association for the Advancement of Science. He was also involved with many other similar organizations. He was the first scientist member of the board of the Bernheim Foundation, and he led the effort of Bernheim Forest to become deeply involved in research in the biological sciences. Burt Monroe, Jr. was also a prolific writer whose works included The Birds of Kentucky, Distribution and Taxonomy of Birds of the World, and A World Checklist of Birds among others. (The high level of accomplishments of the Monroe family did not end with Burt Sr. and Burt Jr., Burt L. Monroe III is a Rhodes Scholar with a doctorate in Politics from Oxford, and a professor at Penn State)

Another avid Bernheim birder was Varley Weideman. Varley had a doctorate in Botany and was a colleague of Burt Monroe. Jr. at the University of Louisville. After his retirement from teaching in 1995, he joined the staff at Bernheim where he worked until 2013, and then continued on as a volunteer.

Today, birding is bigger than ever at Bernheim. Talented researchers are on the staff. Golden eagles are now using the forest for their winter home. Bernheim’s tracking efforts have added to the knowledge base on the behavior of that species. Bernheim was the first location in Kentucky to install the Motus Wildlife Tracking System.

Many members of the Bernheim staff are very knowledgeable about birds and the environments they inhabit and visit. Importantly, there are also many dedicated volunteers who have worked tirelessly to observe and document the bird life at Bernheim and share their knowledge with the visiting public. Volunteer Naturalists, Jim and Karen Scout are foremost among those volunteers and they have shared their knowledge of birds and birding with many visitors through regular guided programming and other chance encounters. Among their other contributions has been their dedicated work in maintaining the purple Martin colonies below the Education Center and in the Edible Garden, a project which was initiated by Larry Melcher in 2004. Larry continues to do valuable volunteer work at Bernheim.

Jim and Karen are updating the list started by Burt Monroe, Sr., and contributed to by others. So far, 72 additional bird species have been identified that call Bernheim home or visit this special place bringing the total number of counted bird species to 240. The 72 added include all nine that Burt Monroe, Sr. suspected would be found. Click here to see the most current version of the Birds of Bernheim list.

Bernheim really is for the birds, in the best possible way. We not only love to see and hear the fantastic variety of birds; the birds are critical in making the forest a healthy and thriving environment. Come on out to Bernheim; the birds are waiting.