You are here: Home / In the News / Walking among the giants at Bernheim 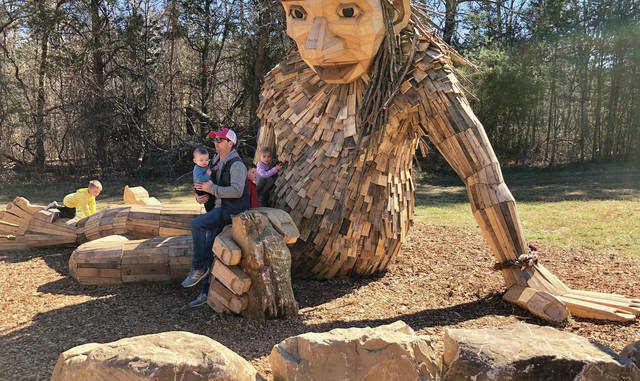 “Daddy, I thought you said the giants were real,” maintained a little boy behind us on the footbridge stretching across a section of Nevin Lake.

“They are real,” the father assured him. “But they only come alive at night.”

“Can we come back in the night, then?” the boy asked.

I silently echoed the child’s sentiments, because it only seems fitting to suspend one’s disbelief on a trip to the Bernheim Arboretum and Research Forest near Bardstown, Kentucky. I mean, Andy’s toys come to life in the Toy Story series. When humans aren’t looking, don’t cows take on human qualities in cartoonist Gary Larson’s work? Why can’t we extend the same consideration to the giant trolls at the arboretum?

Making their home on the grounds of the 16,000-plus acres are Mama Loumari, and Little Elina and Little Nis, her children, the newly-crafted creations of Danish artist Thomas Dambo. They are designed and positioned to appear in mid-story, as described on the artist’s social media sites.

Envisioning Little Nis making his way through the cluster of trees near the water’s edge takes little imagination. His position, that of leaning over his reflection in the water, is naturally inquisitive. Around him, children and adults play and pose for pictures.

Little Elina, a short hike away, uses a stone to carve out an image in the dirt. According to Dambo, she’s been inspired to draw a feather after seeing an eagle. Visitors of the scene dot her bracelet with gifts of flowers and stones to replace the original ones taken by previous guests.

And still, a distance up the path, rests Little Nis and Little Elina’s expectant mother, Mama Loumari. The temptation to linger with her is strong, as she is reclining under a cluster of tall trees near a sacred circle. Here, the artist has created a detailed camp including a collection of pine cones, a wooden skull and various places for humans to sit. Propped up in one of the wooden chairs, a tiny visitor snacked on some chips as other visitors made themselves at home.

The trio of trolls, a special feature of the arboretum’s celebration of 90 years of existence, is just a part of the adventure of the forest. Miles of picturesque trails, a canopy tree walk and a fire tower are additional highlights. With the arrival of spring, now is a wonderful time to visit.

The forest is open daily to visitors. Admission is free weekdays and $5 per car on the weekends. While the forest is open from 7 a.m. to 8 p.m., the staff recommends arriving before 11 a.m. or after 3 p.m. due to the high volume of visitors. Hours for the visitor and education centers are 9 a.m. to 5 p.m.

(Note: Marjorie Appelman is an English, communications and journalism teacher at Mason County High School and co-founder of the travel blog, Tales from the Trip, which is also on Twitter, Instagram and Facebook. She can be reached at marj.appelman@gmail.com.)