You are here: Home / Blog / Variety of Musical Groups Set to Perform at CONNECT

CONNECT at Bernheim never fails to deliver great music. This year we will feature three bands from a variety of genres. Troubadours of Divine Bliss, New Mother Nature, and Old Baby are sure to make your CONNECT at Bernheim experience enjoyable.

The Troubadours of Divine Bliss is a folk band from Kentucky that has traversed America, Europe, and Canada.  After spending some time in the streets of New Orleans as Christmas Carolers, the female duo was named “Best New Folk Band” by New Orleans’ Offbeat Magazine.  After returning to Kentucky, Louisville’s Leo Weekly named them the “Best Folk Band”.

The Troubadours have enjoyed success in the musical realm with the release of six CD’s of bliss since their debut, but have also held workshops and sacred circles to promote healing and spiritual growth.  The women initiated “Mighty Kindness”, a community organization that hosts two festivals each year bringing together the body, mind, spirit, and soul of community.

Unlike The Troubadours, New Mother Nature is a relatively new band made up of faces from bands including The Phantom Family Halo, Natural Geographic, and many more. The group is from right here in Louisville, Kentucky and offers a unique and mature composition style that builds on different musical influences. The sound is said to be “organic”, using straightforward melodies while maintaining a sense of playful, cautious experimentation. 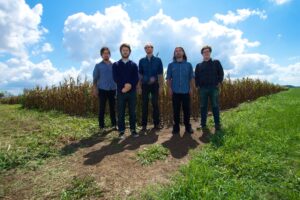 For rock and roll lovers, Old Baby promises to entertain. The local group is based out of Louisville and is with Hawthorne Street Records. The group made the list of The Decibel Tolls best releases of 2012, a blog focused on the best of unconventional music. Old Baby will be featuring songs from their newest album, Love Hangover, that was released earlier this month.  Come out and enjoy the music at CONNECT!