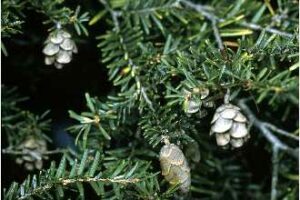 Eastern Hemlock, Tsuga canadensis, is a graceful conifer of the southern Appalachians. With its lush evergreen foliage it is more than lovely, it is also ecologically significant. This is especially pertinent in mountain stream areas of its range, where hemlock trees play a dominant role in regulating water temperature, transpiration, and stream flow – all of which affect aquatic life and the wider ecology of associated communities. The dense evergreen foliage also provides shelter for wildlife, including the ruffed grouse and wild turkey. One of my favorite places to backpack is the Joyce Kilmer Memorial Forest in North Carolina and Tennessee.  Here, the hemlock trees tower like cathedrals of light. It is easy to understand how that forest is a fitting tribute to the author of the famous poem, Trees.

Sadly, eastern hemlocks have been in decline since the presence of an invasive insect species, the wooly adelgid, adelges tsugae, arrived from Japan and began destroying hemlock trees and forest over a decade ago. Where these giants fall, the earth and its creatures surely quake. The surrounding ecological communities change in predicable ways, such as higher water temperatures, lower water flow, and siltation.  They also change in ways still to be determined.

In 2015 the U.S. Forest Service began releasing predators of the wooly adelgid as biological controls. These include species of flies such as Leucopsis silver flies and beetles belonging to the genus Laricobius. In fact, just last month the U.S. Forest Serviced released 1200 beetles Laricobius osakensis, on eastern hemlock trees in North and South Carolina. Appreciating the beauty and ecological role of trees is important if we want to develop strategies for protecting these resources we cherish.

Vanishing Acts: Trees Under Threat was developed and produced by The Morton Arboretum in association with the Global Trees Campaign, a partnership between Fauna and Flora International and Botanic Gardens Conservation International.

Funding for this exhibit comes from The Morton Arboretum and the U.S. Institute for Museum and Library Services, Museums for America Grant Program.