You are here: Home / Education / Treasures from the Sky

Bernheim Forest oﬀers its visitors many treasures. It has wonderful natural areas filled with life of all sorts, a renowned arboretum, artwork including Thomas Dambo’s Giants that attract so many, a fantastic Edible Garden, and a knowledgeable and enthusiastic staﬀ and volunteers to make your visit memorable. Bernheim also has other treasures that only a few have known about.

Have you ever watched a falling star as it leaves its magical track across the night sky? That ‘star’, of course, is not a star at all but a meteor. A meteor is a metallic or rocky body that has entered Earth’s atmosphere. If it doesn’t completely burn up, it lands on Earth as a meteorite. Bernheim has an outstanding meteorite collection that is considered by experts to be of great scientific value. Eager to see it? You need to read the rest of this story.

Some of our visitors may not know that the original plans for Bernheim Forest included a large museum of art and natural history. The museum was to be named for Isaac Bernheim’s beloved wife, Amanda. Unfortunately, this museum was never to become reality. The reasons are complicated but at the base of it was money – money to build it and money to pay for its ongoing operation. 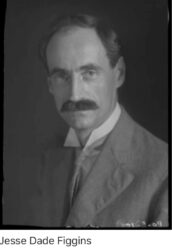 In 1935, Isaac Bernheim hired Jesse D. Figgins to lead the eﬀort to develop and eventually operate his planned museum. Born in 1867 in Maryland, Mr.. Figgins started his professional career working for the Smithsonian’s National Museum of Natural History. He accompanied Admiral (then Lieutenant) Robert Peary on expeditions to Greenland in 1896 and 1897 and helped bring back a very large fragment of the Cape York meteorite generally considered to be the second largest meteorite ever found, also known by its Inuit name, Innaanganeq. This ‘fragment’, known as the Ahnighito weighs over 68,000 pounds and is on display at American Museum of Natural History in New York City. After his return from the Peary expeditions, Jesse Figgins became the Head of Preparation and Exhibition at that museum.

In 1910, Jesse Figgins accepted an oﬀer to become Director of Colorado Museum of Natural History. During the years that he was in Denver, it appears that Dr. Figgins became acquainted with Harvey Nininger. Mr.. Nininger was an avid collector of meteorites. Self taught, he was known for his many expeditions to collect meteorites. He was also known for a frequent lack of funds that resulted in his need to relinquish some his treasures to finance his upcoming expeditions. Some of those meteorites came into the possession of Jesse Figgins.

In 1924, Isaac Bernheim moved from Louisville to Denver. Now semiretired, Mr. Bernheim spent many hours at the museum and made the acquaintance of Dr. Figgins. In 1936, Mr. Bernheim hired Mr. Figgins to be the director of the proposed museum at Bernheim Forest.               Mr. Figgins set up his base of operations at the University of Kentucky, where he started to assemble some of the many exhibits that were to be on display in that museum. He had brought some of Mr. Nininger’s meteorites and acquired others during his time at UK for a total of 9 meteorites.

The meteorites were kept at the Geology Department at the University.  After nine years with the Bernheim Foundation (and always reporting directly to Mr. Bernheim) Mr. Figgins would pass away in 1944. A year later, Mr. Bernheim, passed away on April 1, 1945 at the age of 96. The plan for the museum was abandoned later in 1945.

An agreement was made with the Smithsonian for the meteorites to remain at the museum on an indefinite loan. During the later years of the 1970s, an eﬀort was made by the University of Louisville Museum of Natural History and Science (now the Kentucky Science Center) to have the meteorites returned to Kentucky for display there. The Smithsonian made it clear that the meteorites were a valuable part of their collection and were needed for continued study by researchers. The negotiations eventually stalled and the collection remains in Washington.

The meteorites remain part of the rich legacy of Isaac Wolfe Bernheim. There are many other treasures to be found in Bernheim’s arboretum and forest, come and enjoy them with us.

Bernheim Trustee, and great-grandson of Isaac W. Bernheim, Tom Block has been attempting to get an update of the status of the Bernheim Meteorite Collection. Due to pandemic closures at the Smithsonian, no additional information has been found. If any change in the location or other status is provided this article will be updated.