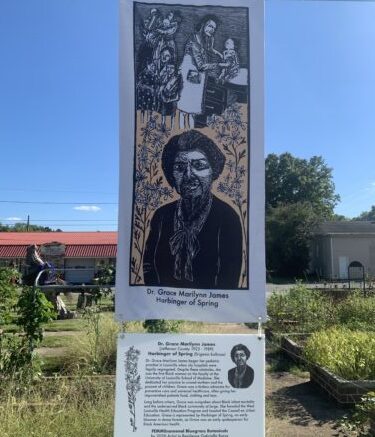 Grace Marilynn James, the first Black faculty at the University of Louisville School of Medicine, is depicted at the exhibit (Raleigh Hightower/The News).

To celebrate the achievements of 10 Kentucky women through the invocation of Kentucky’s native plants, the Murray Art Guild opened the “FEMMEnomenal Bluegrass Botanicals” art exhibit on Sept. 15.

The exhibit is a traveling project by artist Gabriella Boros. Boros created the FEMMEnomenal exhibit during her time as an artist-in-residence at the Bernheim Arboretum and Research Forest.

The exhibit itself consists of 10 hanging prints. Each print depicts a woman who had an influential impact on Kentucky’s history, a portion of that woman’s background, a plant native to Kentucky and a subtle accent of a single color.

Some of the women depicted include Florence Brandeis, an active member of the Women’s Suffrage Association and cousin of Supreme Court Justice Louis Brandeis; Amanda Uri Bernheim, who served as the inspiration of the Bernheim Arboretum and Research Forest and Grace Marilynn James, the first Black faculty member at the University of Louisville School of Medicine.

“As a feminist, I am intrigued and inspired by artist Gabriella Boros’ work,” said Debi Danielson, executive director of the Murray Art Guild. “This is such an inspiring body of work celebrating important Kentucky women and at the same time making a connection with nature.”

In order to further establish a connection between these women and nature, Boros meticulously selected each depicted plant to symbolize the lives of the women. Some of the depicted plants include the Kentucky coffeetree, the liverleaf and the cranefly orchid.

The plants were selected to symbolize many powerful concepts such as struggle, prosperity, elegance, spirit and justice.

“Much like the native plants in Kentucky, despite all the challenges, women stand strong, tall and beautiful, each in their own way,” said Executive Director of the Bernheim Arboretum and Research Forest Mark Wourms.

Boros, who was born in Israel, immigrated to the United States as a child. Boros’ artwork includes paintings, prints and handmade books. Boros also has produced special projects revolving around stones and small wooden cheese boxes.

“We were interested and thrilled at the opportunity to share an exhibition from outside our region with the area,” Danielson said. “During this time of COVID concerns, it is great to offer an outdoor art experience for the public.”

The directors at the Bernheim Arboretum and Research Forest were interested in finding a location in Western Kentucky to showcase the traveling exhibit. The Murray Art Guild was selected to host the exhibition following a recommendation from Shannon Davis-Roberts, co-owner of Walk the Willow and former Democratic candidate for state representative.

The exhibit was previously featured at the Harmony Complex Building in Louisville, Kentucky, and will be featured in Harlan, Kentucky, following its presentation at the Murray Art Guild.

To learn more about artist Gabriella Boros, visit gabriellaboros.com and learn about Boros’ various forms of art and the concepts frequently depicted in her artwork.

For more about the Bernheim Arboretum and Research Forest, visit bernheim.org.

The FEMMEnomenal exhibit is on display until Oct. 16 at the Murray Art Guild located at 500 N 4th St.