You are here: Home / Blog / Trails from the Bent Twig Trail: National History and Medical Mystery

This angelic looking wildflower may have shaped our history as a nation. White snakeroot, Ageratina altissima (formally Eupatorium rugosum) is common along the Bent Twig Trail and is in full bloom right now. This perennial wildflower is viewed by most authorities as the likely culprit in the mysterious illness known as milk sickness, which led to the death of Abraham Lincoln’s mother, Nancy Hanks Lincoln on October 5, 1818. Young Abraham was just nine years old at the time of this tragedy; and the Lincoln family lived in the Pigeon Creek settlement of southern Indiana where milk sickness took many lives. It was not known then that cattle and goats feeding on white snakeroot, passed a chemical complex known as trematol through their milk or milk products to those who consumed it. Trematol, a neuro toxin, eventually caused symptoms such as weakness, loss of appetite, stomach ache, vomiting, muscle tremors, coma and often death. According to interpreters at the Abraham Lincoln Birthplace National Historical Park, Nancy Hanks Lincoln was tending to a neighbor, Mrs. Brooner, who was sick with the illness. Apparently Nancy drank some of the milk while at the home of this neighbor, which would explain why none of the others in the Lincoln family contracted milk sickness. I found accounts that over half of the deaths that occurred in Dubois County, Indiana in the early 19th century were from milk sickness. The illness was also noted to occur in Virginia, North Carolina, Tennessee, Ohio, Illinois, and Kentucky. Since the cause of the disease was unknown for decades, the appearance of milk sickness in a community understandably caused great fear and dread. Sometimes whole settlements cleared out, leaving homes and lands abandoned when this illness appeared among the inhabitants.

This tragic and fascinating medical mystery is full of too many twists and turns and dead-ends (some that open again) for the length of this blog. However, there is some discussion among Lincoln scholars as to whether Nancy died of milk sickness or Brucellosis.  This website has a lively discussion on that subject. In addition, a few authors in other sources were skeptical of the prevailing conclusion that white snakeroot caused milk sickness. Many of these detractors say that there is considerable confusion caused by white snakeroot sharing several common names with similar white wildflowers of late summer and fall; such as –boneset, throughwort, and white wingstem.

One example of a similar wildflower, boneset, Eupatorium perfoliatum is pictured in the photo below; is  blooming at this time, near the Bent Twig Trail’s secondary entrance (to the left of the bridge closest to the Art Barn). Note how the leaves of boneset are are perforated by the stem, and you’ll see how it got its species name. 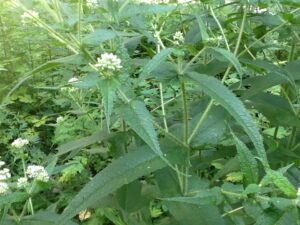 According to a 1963 article published by A.F. Hartman Sr. in the Journal of the American Medical Association, the last cases of milk sickness in humans were reported in 1963. These were among two infants in St. Louis Missouri, both of whom recovered.

It is doubtful that the United States would be the country that it is today, without the strong leadership of our 16th President, Abraham Lincoln. I can’t help but contemplate the sad course our country may have taken had the neighbor offered young Lincoln the tainted milk. When one considers how much of our identity is shaped by our mothers, I wonder how Lincoln’s life, and our country might have been different had the family not suffered the tragic loss of Nancy. We know how one change in life often leads to some roads opening, other roads closing, and some roads leading to paths unforeseeable. In 1818, the autumn when Nancy died, the thunder of cannons and drum beats of the Civil War were decades away.

By all accounts, Nancy Hanks was a loving mother whose death may have not only contributed to changes in the family’s trajectory, but also to a heightened empathy and  sensitivity to suffering of others, which may have been at the heart of Abraham Lincoln’s moral courage and wisdom. I wonder, with all the complications and challenges in our present world, what kind of big changes will unfold in the years ahead as the result of actions, or perhaps paths, taken or not.