You are here: Home / Actions Beyond Our Borders / Tracking Harper: The Winter Range of a Golden Eagle 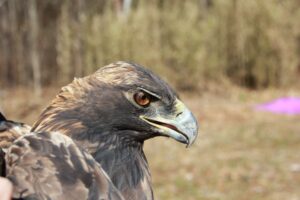 Our latest tracking of the golden eagle Harper began on February 18, 2018. In the 19 days before he migrated, we learned a great deal about his movements within Bernheim and the surrounding knobs, collectively his winter range. His range encompassed 6,289 acres during that period, an area approximately 9.8 square miles. The core of this range is rugged knobs terrain, with peaks and ridges used for roosting and still hunting. Many of his preferred roost locations were the same as during 2015.

In 2015 his range was more extensive, possibly because he was tracked for a longer period of 31 days. During 2015 Harper traveled over an area of 31,818 acres or about 49.71 square miles. Despite the differences in the total area utilized in 2015 and 2018, the complete map of winter ranges shows a clear picture of his dependence on large forest blocks and rugged knobs terrain. 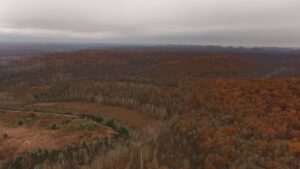 Dr. Tricia Miller, research partner from Cellular Tracking Technologies notes that, “I often refer to golden eagles as the ghosts of the eastern forests. They are easy to spot at migration count sites, but once migration ends, they disappear.”

“They tend to prefer areas where people are not. In Kentucky, that tends to be large tracts of forest in rugged terrain like what is found in the knobs region.  Because they are rarely seen during winter, their habitats and habits have largely remained a mystery.”

Because of research projects like this, these mysteries are slowly being unraveled. Data from tracked eagles and observations throughout eastern North America shows that large forest blocks are a critical component of their winter habitat. They tend to avoid humans and are largely unseen during the winter residence, normally extending from November to March.

By tracking Harper and observing eagles in the field at Bernheim in winter, we have learned that when golden eagles are present, they stay primarily in uninhabited large forest blocks and edges along remote prairies within the forest. Golden eagles seem to prefer these areas within Bernheim for several key reasons:

It’s not just golden eagles that seek these habitats. Other migratory birds and other animals use Bernheim for similar reasons. Neo-tropical migrants, such as warblers, return to Bernheim in May seeking large unbroken forest tracts and abundant food sources in the form of caterpillars and insects.  Mammals such as bats also return every summer for Bernheim’s mature forests.  Large forest blocks, like Bernheim, which is 15,625 acres, are vital for a variety of animals, but they are in short supply in central Kentucky. Bernheim Forest and the surrounding knobs play a critical role in the preservation of wildlife that requires these wild habitats. We recognize that the protection of large forest blocks is critical if we want to preserve wildlife for future generations.