Home » Time or Place: What Makes a Plant Native 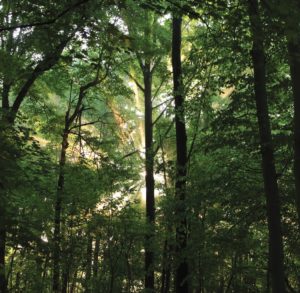 One of the major objectives of the Natural Areas team at Bernheim is to promote healthy plant communities in our forest. A practice that helps us accomplish this goal is to suppress non-native species. This allows native plants to fill their ecological roles within a habitat. Sometimes plants are naturally introduced into a habitat in which they did not evolve.

How do we decide what is native and what is not?  Categorizing plant species as native or non-native might seem as simple as knowing where a plant came from, but it is also important to consider the timeline of when a plant was introduced.

The complicated matrix of ecological interactions within a habitat results from a coevolution process that takes millions of years. Occasionally this process is sped up – a lot!  Seeds are collected and carried from continent to continent in gusts of strong winds, or within the flow of a large oceanic current. Rather than evolving in an environment over millennia, a plant is sometimes introduced to a totally separate habitat in a completely natural way. When you take a closer look at how time informs the idea of nativeness, things become a bit more complicated. 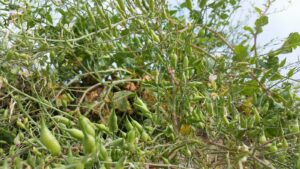 Seeds carried upon a weather front or an ocean current skip a few steps when compared to those plants that evolve within their environments. This type of introduction into a new environment is still a slow process. Few seeds result in slower dispersal and less disruption of the new habitat. Over many, many growing seasons, the introduced plant becomes naturalized into the new habitat with limited disruption.

Humans have also introduced species to new habitats in an expedited, but less disruptive manner. Indigenous peoples of America relied on Jerusalem artichoke as a food source, and slowly moved this species up the eastern coast. It is now considered native to New England, but prior to human involvement, was only found in the southern parts of the east coast.

Introduced species become problematic when this timeline is stripped away entirely. Over the last two centuries, humans have moved bacteria, plants, insects, and animals all over the globe at an incredible and unprecedented rate. The rapid movements of plants and animals on a large, uncontrolled scale can be extremely disruptive and often destructive to habitats.

Some species are introduced on purpose, like Amur bush honeysuckle, one of the most disruptive plant species on the east coast of the United States. This shrub exploded in popularity at the turn of the 20th century and was brought to America at a rapid pace. Known as a quick growing, hardy ornamental plant, this bush was planted in parks and neighborhoods throughout the east coast and Midwest. Due to the scale and quickness of the introduction, as well as limited biological controls, bush honeysuckle escaped planted areas and spread throughout natural areas, including Bernheim Forest. The shrub readily outcompeted native plants and disrupted habitat on a massive scale. The Natural Areas team at Bernheim has worked diligently to reverse this disruption. Over many years, the team has successfully treated hundreds of acres of Bernheim Forest, suppressing this non-native species and allowing native plants to thrive once again.