You are here: Home / Deep Connections with Nature / The Shepherd’s Path 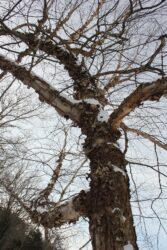 It’s 1913 in a small French hamlet at the foothills of the Alps. The inhabitants, broken and embittered by poverty and their desolate surroundings, make a living by cutting down trees to make charcoal. The people are barely surviving while destroying their environment. The trees are nearly gone, as are other plants and wildlife. All the ponds and streams have dried up and the incessant wind, with nothing to stop it, mercilessly whips the barren landscape. Mental illness and suicide are at epidemic levels; there is nothing anywhere resembling hope in this ruined place.

A solitary shepherd named Elzéard Bouffier — who lost both his wife and child – quietly walks the land planting trees — first a hundred thousand oaks, then just as many beech trees, then birches. Patiently and humbly over several decades spanning two world wars, he restores a broken and bleeding landscape into a thriving and healthy place of forests, waterways and meadows once again populated with joyful families. As one witness described visiting the place in the years following World War I: 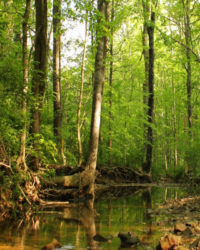 “Instead of the dry and brutal gusts of wind which had greeted me formerly, a soft breeze charged with aromatic odors blew. A sound similar to that of water came from the heights: it was that of the wind in the forests. Finally and most astonishingly I heard the true sound of water splashing in a basin. I saw that there was indeed a fountain, that it was abundant, and, which touched me most, that someone had planted a lime tree next to it, which might already have been four years old, already thick; an undeniable symbol of resurrection.”

Elzéard Bouffier didn’t actually exist; he was a fictional character from the French writer Jean Giono’s 1953 novella “The Man Who Planted Trees.” The book — for which Giono never accepted royalties — also inspired a hypnotically beautiful animated film from 1987 that can be seen on YouTube (embedded below).

Bouffier may not have existed in real life, but as someone once said, just because a thing didn’t happen doesn’t mean it isn’t true. The story of Bouffier is the story of how human hands can be an instrument of destruction but can also be the tools of redemption. It’s also a parable of optimism and hope triumphing in the darkest moments, and the value of believing in one’s own ability to effect positive change against the odds.

We live in strange times. But let’s take this opportunity to search out our own inner Elzéard Bouffier — and have the faith and the courage to forge a path of restoration and healing.