You are here: Home / Thought Leadership / The Saga of the Hidden Springsnail 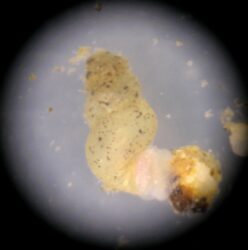 With a name literally meaning ‘born of the wellspring’ and ‘mysterious,’ Fontigens cyptica, otherwise known as the hidden springsnail, evolved within caves and underground aquifers, a body of saturated rock through which water can move. Just as its name suggests, it is highly endemic and extremely secretive.

The hidden springsnail was recently discovered from a springhead along the Cedar Grove Wildlife Corridor at Bernheim, an area threatened by the proposed LG&E natural gas pipeline. Researcher Lori Schroeder made the groundbreaking observation after no living specimen of the species had been documented for two decades.

“This find is significant for Bernheim’s understanding of its springs and biodiversity. Documenting this living population of the hidden springsnail is just the beginning as we continue to research the species and ultimately try to protect it from extinction,” said Schroeder.

The Bernheim team collaborated with Dr. Hsui-Ping Lui and Dr. Robert Dillon to compare the Bernheim specimen to others from within the Fontigens genus. DNA sequencing proved this species to be valid and divergent from the other nine species in the genus. The findings are documented in the upcoming publication entitled High levels of mtDNA sequence diversity among isolated populations of the stygophilic hydrobioid gastropod, Fontigens, in the eastern United States in the Journal of Molluscan Studies. Additional research may prove this to be a new species to science, but for now, we can say it is likely found only within a small region of caves and springs in southern Indiana and central Kentucky. 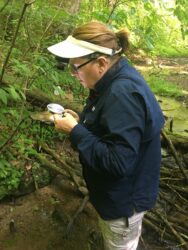 What does this find mean for Bernheim and our understanding of local biodiversity? The hidden springsnail represents a new mollusk species for the state of Kentucky and seems to completely depend upon freshwater springs and underground aquifers for its survival. Its discovery is an indicator of the pristine water quality within Bernheim’s springs, aquifers, and caves.

The springs that harbor the hidden springsnail are also endangered. Pollution and land-use changes have severely damaged many incredible springs locally and across our planet. We must preserve this habitat for wildlife and our communities. All living creatures need protected aquifers along with clean, clear cold water to survive.

Bernheim celebrates Schroeder’s discovery of the cryptic springsnail and continues to work with many different partners towards water protection, water education, and stewardship of over 16,000 acres of natural lands.