You are here: Home / Bernheim History / The Periwinkle Mystery 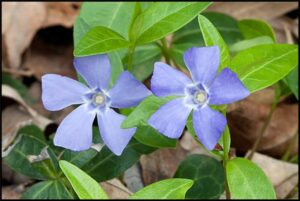 In my efforts to discover the little known stories of Bernheim’s history, the clues are often contained in documents found in libraries, archives, or newspaper articles found online. Sometimes physical objects like the silos or the spring house located in the arboretum spur further research. This story starts with a different clue, periwinkles growing in the forest.

The periwinkle (Vinca minor) is a common garden plant and is often planted as a ground cover. The plant is so well known that its common name is used to describe the lavender-blue color of its flowers. The five petals are arranged in a spiral and are slightly curved giving the flower a pinwheel appearance. Native to almost all of Europe plus Turkey in southwestern Asia, it was introduced to this continent in the 1700s and has been widely planted ever since then. It is sometimes considered invasive.

In late winter 1992, Bernheim ranger Stanley Chesser was exploring land in the Guerrilla Hollow area of the forest. He discovered a large patch of periwinkles growing near Guerrilla Hollow Road. A keen student of both local and natural history, Chesser was aware that periwinkle was often planted around cemeteries for its quiet beauty and to help keep the grounds from being overgrown with weeds. The light cover of snow in the area helped Ranger Chesser detect numerous depressions in the ground indicating the presence of burials. Based on the number of depressions and the field stones used to mark the gravesites, Roger Fauver, the then Operations Director at Bernheim, believed that there were thirteen graves within the cemetery. None of the stones were marked with names or any other identifying information.

The Bernheim staff, with considerable assistance from students, teachers and parents from Bernheim Middle School, cleared debris from the site and set the stones upright. A path was cleared to the cemetery and a cedar fence was constructed to mark its borders.

The next step was to attempt to identify who was laid to rest in this spot. One suggestion was that it could be the remains of guerrillas who fought in the area during the Civil War and have been rumored to have hidden out in the forest. However, there were no reports that substantiated that loss of life in this area. The other suggestion was that this was a burial site for enslaved people. Examination of land records and conversations with dependents of the Magruder family have confirmed this. This cemetery is on land that had belonged to the Archibald Magruder family and is just a short distance from their family cemetery.

In the years following the rediscovery of the cemetery, the site returned to a poor condition. The fence deteriorated and was broken in many places, several large trees had fallen and lay on top of the gravestones, and vegetation had grown up throughout the area. In 2013, Ben Henning constructed a well-built bridge over the small stream on the trail leading to the cemetery as part of an Eagle Scout project. Another Eagle Scout, Alex Welch replaced the fence with a sturdier structure and cleared the area of fallen trees and other debris in 2020. Thanks to these young people, the cemetery is now more accessible and is in better condition for all who wish to pay their respects.

This important part of our history would likely have been lost forever if not for the sharp eyes and knowledge of Stanley Chesser and vinca minor, the periwinkle. Two centuries later, the periwinkles still grow in the cemetery and continue to bear witness to those in bondage who lived and died on this land.