You are here: Home / Homepage Blog Feed / The First Footsteps 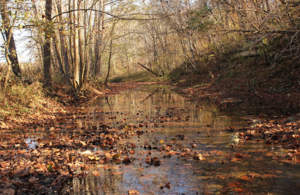 At Bernheim, we experience not only nature, but also the sights and sounds of other people making that same connection.  We see and hear children playing, families picnicking, hiking and exploring the treasures and wisdom of the forest.  We also see and hear Bernheim employees and volunteers going about their tasks.  There are sounds of serious discussions and sounds of joy or even sorrow as special events are observed.  Prior to Isaac W. Bernheim’s purchase of this land in 1928, the activities of the Magruder, Jones, Jackson, Overall, Yoe, and Froman families, among other early settlers, would have been much the same.

Allow your thoughts to travel back to an even earlier time when other people lived, worked, played and celebrated in this special place.  The earliest humans here, the Paleo Indians, arrived at least 11,500 years ago.  They were followed by other Native Americans with a variety of cultures and customs.  Before the arrival of the colonists in the 1700s,, the Shawnee people inhabited much of Kentucky.  They were bordered by the Yuchi and Cherokee in the southeast section of Kentucky and the Chickasaw in the southwest.  When we encounter these people through popular media, far too often we see distorted, cartoonish versions of their lives and their culture.  They were more than that.

The Shawnee had an orderly and well developed culture and governance.  They primarily lived in small villages made up of dome shaped houses.  The buildings were constructed with frames made from branches and covered with bark.  They hunted deer, elk, black bear, and other animals.  They gathered berries and collected nuts from hickory, oak, beech, and other trees.  They tended gardens planted with corn, squash, beans, and other staples.  Their children developed physically and mentally by playing games that trained them in skills that they would need later.  The Shawnee searched these hills for chert, a rock that has two key qualities, it is hard and breaks in a way that produces a sharp edge.  From this rock, they crafted tools, knives, and arrow and spear points.

Following the arrival of explorers and settlers form the East, the number of Native Americans sharply declined due to their lack of immunity to diseases.  Small pox, measles, typhus, and influenza all exacted a heavy toll.  Clashes between the natives and the settlers caused many Shawnee to leave the area.  One of the last encounters, The Battle of the Kettles, took place near the western border of Bernheim.  The passage of the Indian Removal Act of 1830 served to force the remaining Shawnee out of the area.  Today, only a small population of Shawnee remain in the state.

The Shawnee lived in harmony with the land and left little sign of their lives here.  Their villages and homes were quickly reclaimed by the forces of nature.  Their spirit and history remain.  When you visit the forest, consider for a moment the early occupants of this land.  Close your eyes and hear the conversations, the celebrations, the laughter, and the cries of our predecessors.