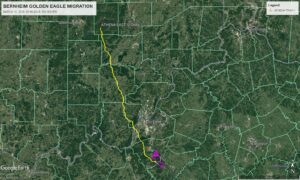 The golden eagles began their spring migration heading north on March 11, 2019. After spending the winter together, and within the last few days, primarily in the interior sections of Bernheim’s forest, traveling between Harts Run and Overalls Fork watersheds. Harper and Athena roosted together near the Bernheim boundary on the night of March 10. The next day at 1:40 PM they ascencded nearly 1000 foot to begin their journey north.

What happened next was interesting. Harper was the first to depart by flying directly north across Crooked Creek Boy Scout Camp and around Lake Nevin in Bernheim’s Arboretum. His signals transmitted until 1:56 PM where he was last tracked at Highway 245 in Clermont moving 43 miles per hour miles per hour. Tomorrow we hope to download the remainder of his tracks for March 11 and learn of his complete travels for the first day of migration. 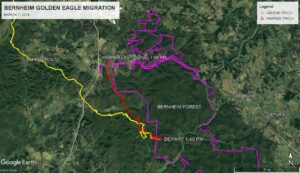 The female, Athena, stopped one more time in Knobs State Forest, and stayed for about 40 minutes, then headed northwest at 2:30 PM towards Indian Knobs and Fort Knox. She crossed directly over Jefferson Memorial Forest and Waverly Hills before crossing the Ohio River at Cane Run Road. From there she traveled quickly along the knobs in Indiana, then northwest to her final transmission location at 8:10 PM in Brown County State Park about 10 miles east of Bloomington, Indiana.

Again we see movements between forested protected areas as a theme during migration, with routes seeming to prefer travel over uninhabited areas where possible. The roost location was on Miller Ridge, an interior section of forest that surrounds Lake Monroe. By the end of her first day she had migrated 93 miles straight line distance in 5 hours 40 minutes.

It will be interesting to see if the two golden eagles will cross paths again. Harper did not transmit past 1:56 PM, so we cannot be sure that the two have not already reconnected. The hesitation by Athena to leave and initial differences in migration paths does suggest more independence during migration. As we get further north and routes past the Great Lakes are limited to basically three choices, it will become more apparent if these eagles are headed the same direction. Stay tuned for more detailed migration maps, comparisons to previous routes, and commentary on the complexities of golden eagle migration.