You are here: Home / Blog / The Bugs of Bernheim: Wheel Bugs – Armed Assassins 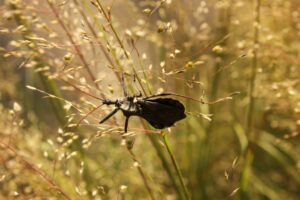 Wheel Bugs (Arilus cristatus) are armed assassins in more ways than one. They belong to the order Hemiptera (true bugs), and like other insects in this order, they have a pair of hardened forewings with clear tips that make them look like half wings. In fact, the name of this order is derived from the Greek word meaning half wing. True bugs are also characterized by peak-shaped proboscis or mouth parts, that can pierce through plants or animals on which they feed.

Wheel bugs are insectivores that eat many garden pests, including Japanese beetles, but they aren’t discriminating – they will also eat other beneficial insects, such as lacewings and ladybugs.  Adult wheel bugs are usually grayish-brown in color and well camouflaged and stealthy stalkers.  A wheel bug’s narrow head hides a deadly weapon for its unlucky prey. Not only can the proboscis spring out like a jackknife to pierce through the bodies of insects, but wheel bugs and other types of assassin bugs are  also equipped with toxic salivary fluids that dissolve soft tissue. This makes a wheel bug’s meal more like a high protein Slurpee.

The common name, wheel bug, is a reference to the coglike armor on their thorax that can be raised menacingly like a circular saw blade when alarmed. They belong to the family Reduviidae, which has over 7,000 described species world wide, many of which are referred to as assassin bugs.  Since adult wheel bugs measure up to 1.5 inches they can certainly capture your attention. Juvenile wheel bugs lack this wheel, looking a lot like many of the other assassin bugs, with orange or red on their abdomens, perhaps as a warning coloration.

Although they are fascinating creatures and always fun to discover, they should not be handled – their bite is reported to be worse than the sting of wasps and hornets. Fortunately they are rather shy and seek to be left alone to search for their next meal.