You are here: Home / Blog / The Bugs of Bernheim: Protective Resemblance 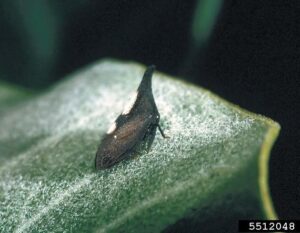 While crouching in a thicket during a game of hide-and-seek when I was about ten years old, I spied what appeared to be a thorn moving along the stem of a blackberry bramble. Taking a closer look, I noticed tiny legs beneath this “thorn” moving it along. I soon discovered that the wings folded over the back and formed a curved point –a perfect replica of the other thorns along the stem. I later read that the “thorn” was a type of insect called a treehopper.

The disguise was just one of many examples of what scientists called protective resemblance. Protective resemblance is a carefully evolved strategy by which creatures avoid predators by resembling things in the environment …like thorns. Walking sticks are excellent examples of this protective strategy.   These creatures not only look like sticks but actually develop a slow rocking motion that resembles the subtle moments of twigs swaying in the breeze.

I learned that several caterpillars, including the early larva stages of the spicebush swallowtail butterfly, resemble bird droppings, and thus become unappetizing to birds. 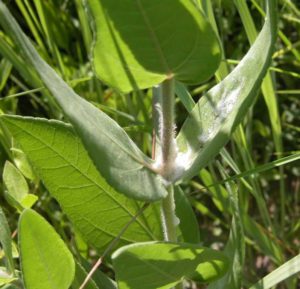 From the encounter with the treehopper, my interest in insects and other “creeping crawlies” grew. I began actively searching  out the tiny creatures that resided in my favorite wild haunts. Discovering that what my neighbors called “snake spit” was actually the hide-out of a tiny creature known as a spittlebug ,which also hides in its surroundings.

One of the things that I find most fascinating about the natural world is the way plants and animals are adapted to their surroundings. When we take time to notice these things, we discover that the nature is awe-inspiring.