You are here: Home / Blog / The Bugs of Bernheim: Diptera, The True Flies 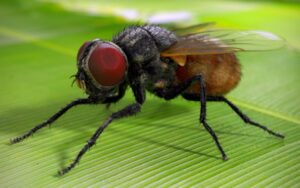 Diptera, the true flies, are named because unlike many insects, they fly using two true wings.  There are more than 150,000 different species of flies.

While most people tend to think of them as dirty creatures, perhaps we should take a second look at that assumption.  In reality, our world would be a great deal dirtier without them.  For one thing, flies are responsible for helping rid the world of decaying plants and animal carcasses.  Dead things disappear more quickly thanks to flies.  Don’t believe that?  Take a moment to observe a dead animal beside a road sometime.  You’ll have to look quick because flies will quickly lay eggs in that animal and as their larvae eat the carcass it begins to disappear.  Sometimes all it takes is a day or two. That may sound gross but it would be far grosser if all the dead bodies of animals piled up along our roads.  And here’s an odd thing to consider…flies constantly clean themselves.  They groom themselves far more often than people do.

If eating things is one benefit of flies, being eaten by other creatures is equally important.  Flies are an important food source for lots of other creatures like bats, lizards, many birds, some fish, frogs, spiders and lots more.