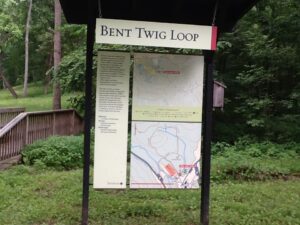 Say the title of this blog three times and see if you don’t end up sounding like Tweety Bird! All joking aside, the Bent Twig Loop winds through a patch of woodlands just outside my office in the Bernheim Education Center.  At least once a week I walk this trail attentive to the gifts, large and small, that exist along this woodland trail.  Today, I decided I’d share a weekly blog from the vantage point of this 1/2 mile loop. By doing so, perhaps I’ll encourage you to go take a hike, or at least slow down and notice the sometimes hidden delights and mysteries beyond your doorstep.

The Bent Twig Loop represents a microcosm of many wooded areas of Bernheim. Discovering this forest fragment may be the first step towards greater understanding of both the history and ecology of this area. So step across the bridge with me and explore some of the common creatures and features that you’ll likely encounter here and elsewhere in Bernheim’s forested landscape. 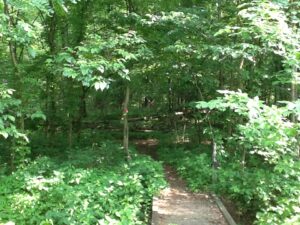 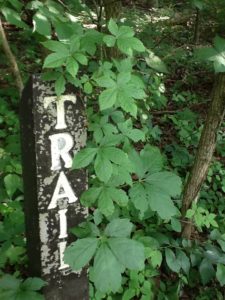 Safety First! Don’t worry, it’s not poison ivy (Toxicodendron radicans) that greets you as you enter the trail, but Virginia creeper (Parthenocissus quinquefolia) . Virginia Creeper is a vine with compound leaves; each leaf consisting of five leaflets. Poison ivy also has a compound leaf vine, but with 3 leaflets. The old adage, leaflets of five, let it thrive, but leaflets of three let it be, may help you remember the difference and enjoy your hikes. Both Virginia creeper and poison ivy provide berries that are eaten by many small mammals such as chipmunks and mice. American robins, eastern bluebirds, and northern cardinals are just a few of the birds that feed on the berries produced by these common Bernheim vines. 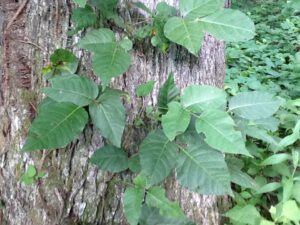 Have you ever wondered how poison ivy causes the rash? Poison ivy is in the same family as cashews and contains an oily compound known as urushiol, which can cause an itchy, blistering rash hours after contact.  Learning to distinguish between harmful plants and animals empowers us to enjoy our time in nature at Bernheim and elsewhere. Learning the stories of the plants and animals around us adds pleasure and understanding.

Seeing the Trees and the Forest 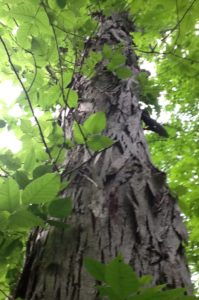 Shagbark hickory is an easy tree to identify because of its aptly named, shaggy bark. You will find several of them along this trail, along with many other locations around Bernheim. The large shaggy plates of bark provide shelter for bats, moths and other animals during storms. Unlucky is the moth who shelters under a piece of bark where a bat has hunkered down. Hickory nuts are important food for many mammals, especially eastern gray squirrels and chipmunks. Gathering the nuts and hiding (burying) them in small caches, is a practice known as scatter hording. These caches of nuts and acorns contribute to reforestation, since many of these seeds go uneaten, sprout and become trees. Historically significant as food for humans, most folks find them a bit tedious to prepare, due to the tough hulls, but these nuts taste much like sweet pecans to which they are closely related.

“Way down yonder in the pawpaw patch” seems a fitting refrain from an Appalachian folk song as you venture down this trail, where you will encounter the first of several small patches of this unique under-story tree; pawpaw (Asimina triloba). The leaves are large, simple with smooth margins, and alternately arranged on the twigs. I think the crushed leaves have an odor similar to green peppers. They contain a toxic chemical (an acetogenins) which gives the foliage insecticidal properties, and deters many insect predators. One exception is the larvae of the zebra swallowtail butterfly which feeds exclusively on the leaves of this genus. Thus pawpaw trees are important to the life cycle of this lovely butterfly. I will speak more about the fruit and other aspects of this tree in future posts. 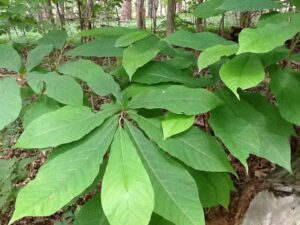 Near the first pawpaw patch you’ll find a short side trail leading to a circular sitting area. At the beginning of this side trail is a small sassafras tree. Sassafras (Sassafras albidum) has 3 distinctively different leaves–leaves shaped like spoons, mittens and three-fingered gloves, all on one tree. Look around and you’ll see this small tree and others in this area – some that are a good deal larger. The root bark of sassafras has an odor of root beer, and was used in  many early root beer recipes. I’ve enjoyed a tea from these roots in my youth, but today the FDA cautions against its use internally due to a a carcinogen known as safrole. 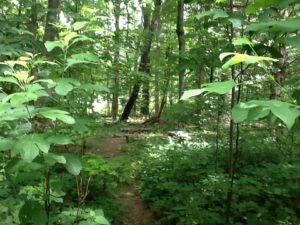 If you gently bruise the leaves of sassafras you will enjoy a lemon lime fragrance. Adding water to those leaves and rubbing them together quickly will create a mucilaginous slime that illustrates its former role as a thickening agent in Cajun cooking, such as gumbo.

As you look for sassafras, you might encounter one sassafras “impostor” – mulberry trees, which sometimes have similar shaped leaves. However, the leaves of mulberry are toothy (serrated margins) and rough to the touch. Notice the sassafras on your left and the mulberry in the right of the photo below. 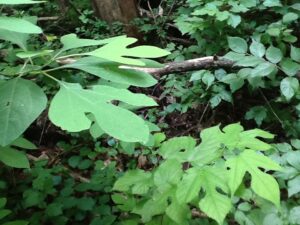 If you walk a few yards down this side trail you will find a circle of benches. This is a good place to sit and listen to the chorus of woodland birds that I often hear along this trail, including one of my favorites – the eastern woodthrush, whose haunting and echoing song sounds like a flute in a jar.  Please check back each week, and I’ll share more Tales from the Bent Twig Trail. Want more Tales from Bent Twig? Click here to view the archive. 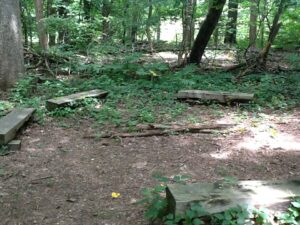