You are here: Home / Blog / Tales from the Bent Twig Trail: Woodcocks 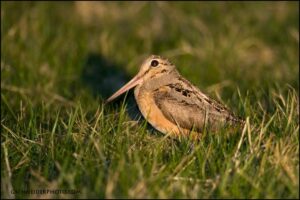 I’m delighted to report that American Woodcocks, Scolopax minor have returned to Bernheim, and are looking for love. Two weeks ago, my sister, Kathy, and I spotted one in the grassy area near the front gate. Last week I saw one on Bent Twig Trail and followed it for a bit into the heavy brush. Its movements on the ground appear  more like a bobbing strut than a walk, waddle or a hop that one might expect from other ground nesting birds. In fact, another common name, timberdoodle, nails this rather comic ground movement — the birds appear to take two steps forward and one back. This doodling seems like it would disadvantage the birds, but they can take flight quickly, as I discovered in my less than stealthy attempt to follow. Woodcocks are well camouflaged, to resemble the dried grasses and leaves of their habitats. They also have eyes position near the backsides of their head which helps them avoid predators. When it come to getting food, woodcocks have a specialized adaptation — a flexible almost fleshy tip on their beaks for probing under leaves for worms and other invertebrates.

I’ve seen these birds many times over the years, and their movements on the ground and in the air are both fantastic in different ways. Conservationist, Aldo Leopold, wrote eloquently of their evening sky dances and thus helped others appreciate the American Woodcock as more than a game bird. The male woodcock usually begins his courtship in Kentucky and the surrounding region in February  and March.  Twilight appeals to the woodcocks sense of romance. The males begin with a rasping peent call from the ground, followed by a spectacular sky dance that includes high dives, wing whirls, twitters, and ziz-zazs.  Learn more about woodcocks and possibly  witness this sky dance yourself by reserving your spot in the Creatures of the Night program on March 18. Space is limited. The sky dance of the American woodcock taps deep into what is mysterious and inspiring about the natural world.