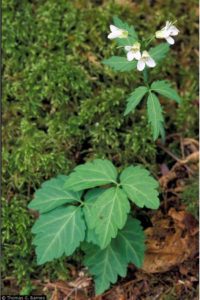 ed fists for days, are now opening. Both the common name for these diminutive members of the mustard family (Brassiceace), and one of the often listed genus names (Dentaria), seem fitting. The four petals of each blossom are usually white or pale pink and never open wide. This gives each bloom a toothy appearance. The name also appears to be associated with tooth-like protuberances found on the root mass of some toothworts.
It may be helpful to know that the oft used suffix “wort” is derived from the old middle English, wyrt, basically meaning plant. Often “wort” or “wyrt” was applied to plants used medicinally. In herbal lore, toothwort is listed as a treatment for all sorts of ailments, including toothache. This is probably in conjunction with the doctrine of signatures, an archaic notion that the creator marked plants with a “signature” or clue to its medicinal value. Thus the common name, toothwort makes sense. The older genus name Dentaria again points towards a toothsome origin: think dental and dentistry.
The roots of two-leaf toothworth, D. heterophylla, also known as crinkleroot, have a long history as a condiment. These have a peppery heat similar to horseradish, another member of the mustard family. I’ve found three species of this genus at Bernheim, cut-leaf toothwort, Dentaria laciniata, two- leaf toothwort, Dentaria diphylla, and slender toothwort, Dentaria heterphylla.

On Rock Run Loop, you will find a similar looking wildflower purple cress Cardamine douglassi blooming prolifically. Some authorities now list all members of the genus, Dentaria as Cardamine. Since the flowers of these individuals are so similar in appearance, the key to identifying them is found by examination of the leaves and leaflets.

On Saturday, I found several tiny back beetles crawling about in the heart of these early bloomers. I also watched as several tiny gold and green colored bees visited the blossoms. I’m not sure if they were attracted to the bright petals that the plants use to advertise their nectar and pollen, or some hidden fragrance or both. But suffice it to say the bugs, bees, and I were happy to find these toothsome signs of spring. Come out and see what other wildflowers and signs of spring you can find on our 40 miles of trails. Spring wildflowers march rapidly into and out of our viewing pleasure.