You are here: Home / Blog / Tales from the Bent Twig Trail: Season's Greetings 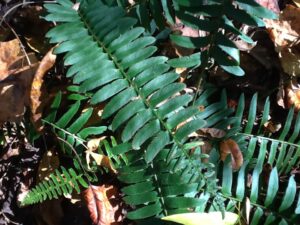 Regardless of the season, Christmas ferns (Polystichum arotichoides) are a gift of green. Aptly named with their stocking shaped pinnae (leaf like structures) that make up each frond. Christmas ferns brighten the forest floor with their perennial splash of color. Although visible at Bernheim year round, these ferns are particularly noticeable around the winter holidays when their vibrant green contrasts against the muted shades of brown, tan, and gray that dominate our winter woods. Usually by now the forest floor is illumined by a soft blanket of snow and in such conditions these Christmas ferns provide eye candy just in time for the holidays 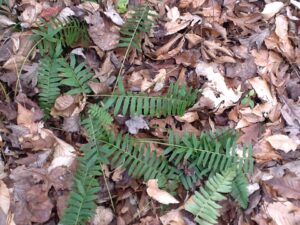 Ferns represent a division of plants from the Mesozoic era, 360 million years ago, and are older than dinosaurs. As a group, ferns are related to club moss (Lycopodium) and horsetail (Equisetum). Kentucky coal and other fossil fuels were formed in large part from prehistoric forests dominated by ferns and their allied groups. Those ancient forests of ferns warm us today, both in the energy generated by coal firing plants and by a rapidly warming climate. But let’s not blame the ferns for our folly, should we ignore the dark side of burning fossils fuels.

Ferns have long been associated with magic due to the mystery of how they reproduced. Medieval European literature abounds with references to the power of fern “seed” to grant invisibility to anyone possessing them. Even Shakespeare weaves the fern seed legend into a robbery plot in Henry IV. However, there was a problem with this notion. Fern seeds could not be found, because they do not exist. The invention of the microscope uncloaked this mystery by revealing the presence of dust like spores released from small reproductive structures under the fronds, known as sorus. Reproduction by fern spores involves alternating generations of sexual and asexual reproduction– an intriguing and sophisticated set of reproductive adaptations and life cycles. We’ll explore fern life cycles in a future post, but for now enjoy the gifts of this season, including all the little green stockings hung with care.