You are here: Home / Blog / Tales from Bent Twig Trail: Not All is Touchable 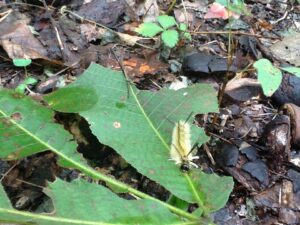 It’s often been said that the more you know, the more you realize you don’t know; and just how much there is to learn. It does seem that the more I dig in and try to learn about the natural world, the more it appears that I’m just scratching the surface. But ah, isn’t it a great surface to scratch?  Having said that, not every surface should be scratched. Case in point:

Today, I came across a this fuzzy little critter that seems to be causing a stir in the last few years. The hickory tussock moth caterpillar (Lophocamp caryae), sometimes called a Hickory Tiger Moth (and classified by some as a type of dagger moth), is common at Bernheim and throughout Kentucky. I’ve handled these caterpillars many times over the years with no ill effects. But I’ve run across several reports that these and other tussock moths are poisonous to touch. After much research to see what gives, I turned to the source of all truth and wisdom, Snopes.com. It seems that these rumors are considered as partially true.  These caterpillars excrete a chemical defense when handled “that is more allergenic than . . .  poisonous”. This chemical probably penetrates via the sharp hairs. Symptoms can be mild burning and itching, or moderately severe. However, in some cases the allergic reaction can be painful and severe enough to cause nausea and the need for medical treatment.

So as we gear up for Bugfest, and actively look for all kinds of creepy-crawlies to investigate, let’s stay curious, but also  cautious before attempting to handle even cute caterpillars. Although they appear to be all body and  legs, some are armed.