You are here: Home / Blog / Tales from the Bent Twig Trail: Mysteries of the White Moth 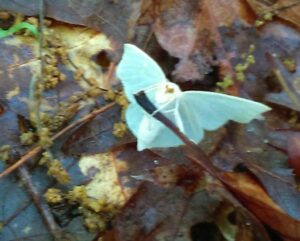 It’s not what we know that ultimately matters, but what we hunger to understand. Whatever fuels our curiosity lights our path, perhaps like moonbeams, or moth wings.  Could it be that our personal evolution is sparked more by moments of wonder and the journey that such “wonder-lust” leads us on, than by moments of clarity? I’m  not trying to sound prophetic, I’m merely taking to heart Rachael Carson’s notion of a “sense of wonder”. I’m wondering if mystery or wonder are necessary to our personal and planetary salvation. Surely, there would be no hope for us, or the plants, animals and landscapes we cherish without it. 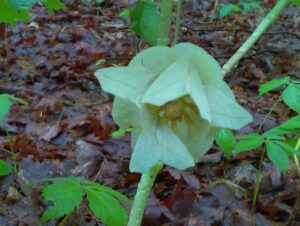 A couple of years ago, I joined Bernheim’s outstanding Volunteer Naturalist, Joe Cichan and a dozen guests on one of Joe’s Froggy Night Adventures. In the darkening woods the mayapple blossoms shone brightly in the moonlight as the frogs added their soundtrack to our evening in the forest . Because of the brightness of the blooms, I bent to examine one beneath a mayapple’s twin umbrella leaves. By chance I touched a petal that wasn’t a petal. It moved, revealing itself to be a white moth. Her wings were nearly as large as the petals. I looked closely and discovered seven white moths, each with the same tan-colored line on their wings, and each moth hidden well against a petal. I was awestruck! In all my years of traipsing about woods and looking for and at wildflowers, I ‘d never seen these moths. What were they, and what were they doing?  I researched, but only found one reference to this white moth and no genus or species name that might provide a more sure road map. Last year I checked out dozens of mayapple blooms, but never found the mysterious white moths. 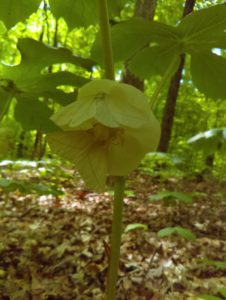 But the Bent Twig Trail offered a treat this week. The mayapples were blooming, so I took a peek. And there they were! Over fifty percent of the fully opened mayapple blossoms I examined had one to seven of these moths tucked inside them. Nearly all of the moths faced inward towards the pistil in the middle of the flower, and this added to the floral illusion. Once again I searched reference books and the Internet for clues. This time I did uncover at least part of the mystery. 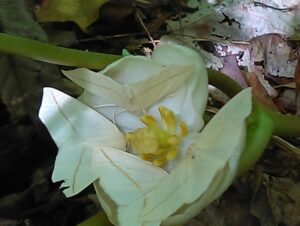 The white moth is called the white slant-winged moth – Tetracis cachexiata and belongs to the family Geometridae. I learned that the caterpillars feed on ash, maples, cherry and several other trees and shrubs, but found nothing noting their communal behavior, or what the relationship between the mayapple and the moth might be, or how it evolved.  Since all parts of the mayapple, except for the ripened fruit, are poisonous, I fancied that these moths were in a secret lepidopteran society partaking in an ancient narcotic nectar sipping ritual, but my research indicates that mayapple flowers produce no nectar. Then I speculated that they were gathering pollen and were circled about in a moth version of a quilting circle. Maybe they were stitching together some secret fabric of the planet, yet to be discerned. When  collected by entomologists and studied, these moths had very little pollen on them, and thus it seems unlikely that they contribute much to mayapple pollination. Certainly the careful camouflage  provides protection for the moths, but how did this relationship evolve; and if not helping with pollination, do the moths contribute something or some other service for the flowers? Or are these winged phantoms the sole beneficiaries of this relationship?

The wonderful thing about wondering is that the journey continues. We move a few steps forwards, uncover a mystery and are teased to follow the path of discovery, or in some cases the will-o’-the wisp. But even that “foolish fire” can lead to worlds unknown; maybe the white moth has even greater secrets to reveal.